The Cairngorm disaster a look back. 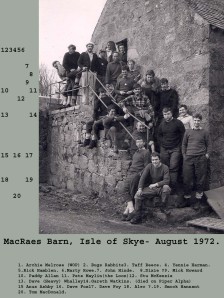 RAF Kinloss MRT Mc Raes Barn Glenbrittle Skye, I had been in the taem for 6 months when this photo was taken, just a bairn.

I was trying to play golf yesterday at Elgin with an old friend Stewart Mac Kenzie, we had a good game though the knee was a bit sore. I was invited back for my tea and we had a great meal with Stu and his wife, magic soup and a stew, all home-made using most of his own vegetables. Stu was in the Mountain Rescue when I joined in 1972 and looked after me. He was also one of the team who was involved in the Cairngorm disaster in November 1971 when 6 children and an adult were caught out on the Cairngorm plateau and died in a blizzard. This was a disaster that changed mountaineering forever and undoubtably effect all the teams involved. Very few of the people involved talk about the rescue that followed as there were 2 survivors one young lad and a teacher. It was a terrible reminder of what can happen when it all goes wrong on the mountains. It was a catalog of errors from a late start in November with only 6-8 hours of daylight, a poor route, too long for the time and of year and a bit too much for children. In the end they bivouacked and died in a blizzard near the safety of a bothy on the plateau.  When I do my mountain Safety lectures I always talk about this disaster as there are so many points that are relevent every year and many do not know the story. It should not be forgotten.

I will be up in the Cairngorms on Thursday with my friend Ryan from Torridon we are hoping to get out for a walk across the plateau before the winter comes. The cairngorm plateau is a wonderful place when you get away from the paths, there are so many places to explore. I hope the weather is good and the knee holds up, we will soon see.

2 Responses to The Cairngorm disaster a look back.