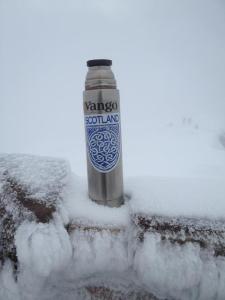 The weather was wild again yesterday and we tried to play golf at Hopeman, in the end it was so wet we came off frozen (colder than Canada) to hot soup and soaking gear.The sleet and driving rain straight of the sea was wild and the wind biting.  I am hoping to get a lift today to get on the hills and to try to get another  Corbett in near Kintail on the West Coast, where the forecast is for better weather!  I have several friends going out to Kintail for the day and hope to get dropped of near Loch Cluanie and climb Beinn Loinne .790 metres the “bony ridge” in Gaelic. Though only a small hill it is along rocky sprawl of a ridge and rarely climbed  on the South side of Loch Clunnie and back to the Cluannie Inn for soup. There was plenty of snow across the Moray Firth yesterday and the snow level was coming down again, it has been bitterly cold. Beinn Loinne is a hill I have often admired but never climbed as it is set amongst the South and North Cluanie where there are bigger hills and magnificent ridges, which are very popular for the walker. On the way off the hill back to the Cluanie Inn I will walk along the old road to Tomdoun and pass the beautiful Cluanie Lodge where I stayed on two of my traverses of Scotland after climbing the 9 Munros of the South Cluanie before moving on to Glen Affric. What a setting on the shores of Loch Cluanie, they knew where to build a house in the past and the situation is incredible.   It will be a walk back down memory lane, I came off these hills tired a few times in my youth! Now where is my ice axe, winter is not over yet!

Mountain Rescue Specialist. Environmentalist. Spent 37 years with RAF Mountain Rescue and 3 years with a civilian Team . Still an active Mountaineer when body slows, loves the wild places.
View all posts by heavywhalley.MBE →
This entry was posted in Corbetts, Friends. Bookmark the permalink.