It was an early start as I was picking up Gus and getting a lift to Kintail on the West Coast. An early call from Australia made sure I was up early and what a morning, the sun was blazing at 0600. Four of us travelled in Yeni’s car save cash and Gus was out again after a wee absence for the hills. The journey to Kintail was superb and we could see the fresh snow on the tops, I was soon drooped off at the end of Loch Cluanie on my own to climb Beinn Loinne. They boys were after another Corbett Am Bathach and maybe the Munro Ciste Dhubh, Gus was in for a wee walk, but what weather and the big peaks looked plastered with snow. It was to be another day on my own, what have I done wrong?  The boys dropped me off at the Dam on Loch Cluanie but the dam is fenced off (Health & Safety) no bridge and the Dam pouring out water made it a wet scary start. The hill Beinn Loinne (bony ridge) follows the South side of Loch Cluanie a grand view-point of the Kintail hills. It has 3 tops and has some great scrambling especially at the beginning of the day, working your way through the little cliffs. I took my time and the lightweight boots not much use on the steep ground. Not the place to fall when walking alone!

I met no one all day it was wonderful and one of the joys of these hills. The views just kept changing, what a viewpoint for Ben Nevis plastered with snow,, the massive Loch Quoich Hills and the South and North Cluanie of Kintail, what a day. Unfortunately you can see the wind – farm on the Corbett Meal Dubh all day and the plan is for more in this beautiful area, it does spoil the views in my opinion. The weather was superb, a chilled wind but no snow hardly at all on my hill but my feet were cold after the soaking in the river. There were loads of hinds and a pair of Eagles on soaring at one point.  As the boys would be out for a while there was no rush and I followed the edge of the ridge looking into the steep cliffs of the ridge and drinking the views. This would be a trick day in poor viability with the navigation interesting. Hamish Brown in his bible for Munroists and Corbetters “Hamish’ s Mountain Walk and Climbing the Corbett’ s” says that it is “ten rough miles of walking!” I agree with him. Eventually I reached the summit after three tops and some rough walking and had my soup and sandwiches and enjoyed the sun. I have so many memories of these great hills, now pretty plastered in snow, was I envious of being up on the big peaks, no way this was heaven. My own pace, slow! No rush and as many stops for photos as I wanted, I took over 70 photos. 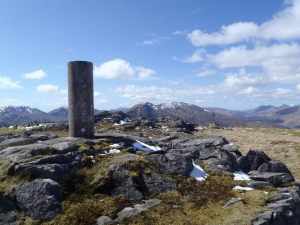 I was soon down on the old road, a road with many memories for me usually after a traverse of the 9 Munros of the South Cluanie ridge usually with new team members when on Mountain Rescue and feeling tired but not today, it was a great walk off. I was soon heading for the Cluanie Inn and a refreshment while I awaited for the boys. The sun was out and I sat outside, no company all day but it was grand to wait for them arrive. They had a superb day lots of snow and Gus was over the moon with the day and it was four happy guys who travelled back after a wonderful day in these great hills. Thanks for the lift and the company Gus, Yeni and Brynt.

We are blessed to live in such a place,  I fell asleep before match of the day, listening to “Here comes the sun !”