Skye was incredible Sgurr Dearg and the In Pin hot, hot hot!

The Skye ridge near the summit of Sgurr Dearg with Sgurr Mhic Connich in the background.

My mate Brent is now down to his last 6 Munros after managing to avoid the crowds and the baking heat in Skye yesterday. We left Inverness and had a magic drive to Skye from the Lochcarron road, it was so warm in the car and we left at 0800 and the forecast was for 30 degrees on the West Coast, it was hot. The views as usual were spectacular but the heat even in the car incredible for Scotland., I was prepared for a hot day as we arrived in Glen Brittle after a 3 hour drive the views of the ridge as you hit Skye from the bridge are still eye-watering,the views of sea and the rock is still to me what Scotland does best. 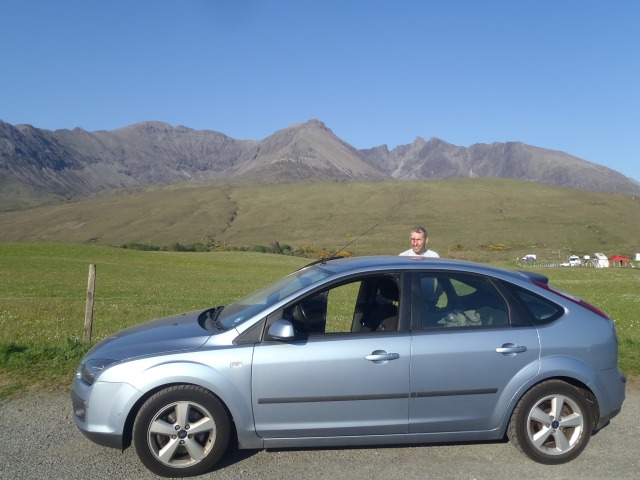 The view of the Skye ridge from Glenbrittle camp site, inspiring.

The camp-site was not that busy but by now it was 30 degrees and we set off at the hottest part of the day. I took 4 litres of water with me as I knew dehydration and heat stroke could be a real problem. We took on plenty of water on the journey on about 2 litres and the only minimum kit in our bags was the rope for the climb and some basic climbing kit. A sun-hat and cover for the neck, wet whenever we hit water was essential as was plenty of stops to rehydrate and cool down.We climbed the South West Ridge via Sgurr Dearg Beag a steep scramble up to the ridge via scree and some good rock. The dramatic views of the  Inaccessible Pinnacle and the ridge marks the climax to the ascent.

The were a few on the climb and we had a break and had the climb to ourselves nearly! We mate a pair doing the ridge but really struggling in the heat, stopping very regularly and running out of water. There is little water  on the ridge and it is usually cached in strategic places beforehand! It is a great wee climb easy but exposed up an amazing fin of rock which defeats many hill walker. It has good holds but exceptional exposure and is the hardest mountain summit on the British Isles. Bryn had provided the climbing gear which was a bit old to say the least Mallory may have used it!  It was a usual a wonderful wee climb and still extremely hot  and the wee 20 metre abseil from the Bolster stone make sit a grand outing. It is a huge part of a Munro baggers list and great to see the joy on the faces of those who climb it for the first time. Sometimes climbers lack patience with people who are climbing for this first time and forget the joy of this experience when rushing around, never forget your routes and how special a day this is to many including me.

Nearing the top of the In Pin Skye on a hot day!

We were soon down and out of water so it was a steep descent back to Glen Brittle hard work in the steep scree in shorts is not recommended, we heard lots of rock fall in the Great Stone shoot as the people descended some of it very dangerous indeed! We watched where we were going and soon reached the loch and a wee burn where we managed to rehydrate slowly but the heat was incredible and we were suffering after 7 hours in 30 degrees. We saw a deer possibly calving and gave her a good berth she was struggling in the heat a s well but what a day as we trudged down in the heat to the camp-site.

The top of the In Pin!

We had a meal at Portnalong in the Munro bar and stayed the night, meeting the RAF Kinloss Mountain Rescue team who were all going for the ridge.  I wonder how they got on one hill was enough for me in that heat but I am an old man! I met Tony one of the Skye Guides who had just done 18 days working on the ridge and was starting another 5 days today, incredible. He looked mean and fit and what a guy, there are some special people out there.

Have fun in the sun use plenty of sun screen wear a hat and cover up. Drink, drink it is dangerously hot out there.  Worth remembering!