I have a great friend who is just away to the Alps he goes most years and is a multi talented mountaineer and climbed all over the world. He has borrowed my gear for the Via Ferratas as an alternative to the big mountains if the weather is poor high up. The Via Ferratas are cables, ladders, bolts and rungs that were put on cliffs to assist the locals, for access and now are a great and safe way with the correct gear to enjoy these big hills. 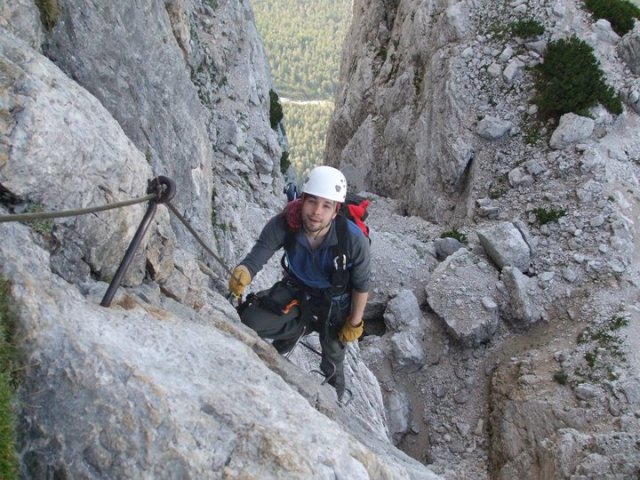 Stephen enjoying an easy Via Veratta in Italy – great fun but must be done safely.

My days of the Alps are over, I will try to get a a few other trips money permitting and I did 15 seasons in the Alps. I had many great times 4 ascents of Mt Blanc and many other great peaks as the Eiger the Matterhorn  some great days. Most times I was with RAF Mountain Rescue Team member’s  most on their first trip to the Alps. As a very average mountaineer I found it a hard apprenticeship and being tied to a tired novice at the end of along day/night brings back many fun days and the odd nightmare. We learn from experience and each time we go we learn and put it in the “tool box of experience for later adventures”. 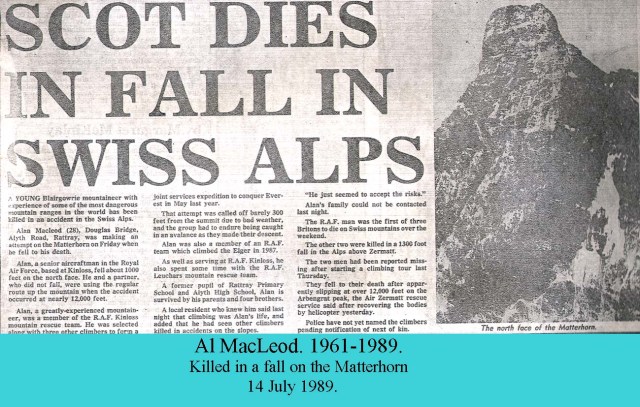 In Mountain Rescue you meet some great characters and my great friend Al McLeod was on of them. He died after a fall on the Matterhorn North Face whilst soloing on the 14 July 1989. It was a tragic day when we got the news. Al was just leaving the RAF and had planned a years climbing. He was a superb mountaineer and just back from an unsuccessful attempt on Everest West Ridge, he had attempted the summit and was 1000 feet from the top after climbing the Hornbein Coulior, the weather came in and they descend. As a young man he had so much to live for, he like the rest in our prime of youth  felt so at one in the mountains. He was so powerful and regularly ran back to the bothy after a huge hill day. He never showed tiredness, just power and though not a natural climber on rock he was so strong. As a winter climber he was exceptional. He love the mountains and the wild and as a local boy from Blairgowerie he had spent his life in the hills. 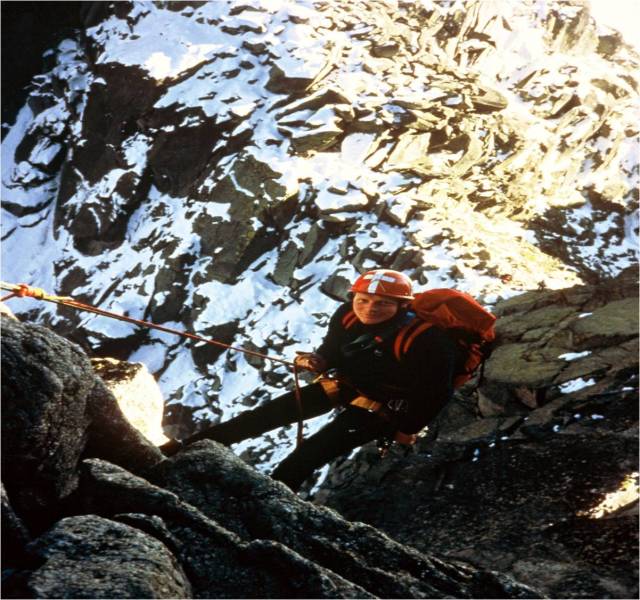 I watched him grow in the team – and become superbly fit, every big day was added to and new challenges were always beckoning. He climbed the North Face of the Eiger with Ted Atkins and many other big routes in the Alps yet he loved the challenge of the Scottish hills. Always moving fast on the hill he would be off in his red windsuit for another top or climb. We had some great days and he enjoyed pulling me up some good routes. Winter fun in the Gorms , night ascents of the Mirror Direct in the Cairngorms, summer after work climbs on Savage Slit and chasing Patey’s classic climbs. He was fun to be with and every day was entertaining. We had some magic days is Skye and he ran the ridge and then climbed some great routes next day with me on the Cioch. He would not untie me and I was dragged up one of my best days on Skye, “Cioch Grooves, Bastinardo and the Nipple” after a big scary fall!   Yet we went many times to Coruisk in Skye and climbed some classic lines , it was days on the hill and the company that mattered. 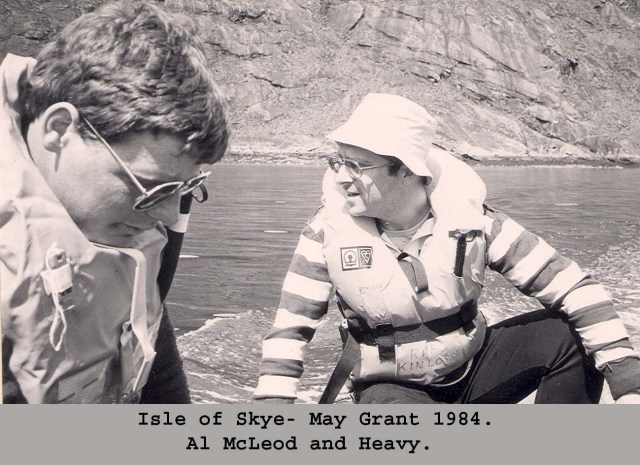 On the way for an adventure in Skye with Big Al MacLeod.

Al was a wild guy who lived life to the full, as a friend he was one of the best and we got on so well despite the huge differences in ability in the mountains. He loved the social life, the bothies, the dances the local girls. he always had a huge smile. At times we had to look after him he lived for every minute of every day. When after the Lockerbie Disaster the man who looked after me was Al – he came over form Fort William after Christmas as he knew I was in a mess, few would do that. We went for a wander on the hills and talked through it and he looked after me when I relaxed that night. It was long overdue. 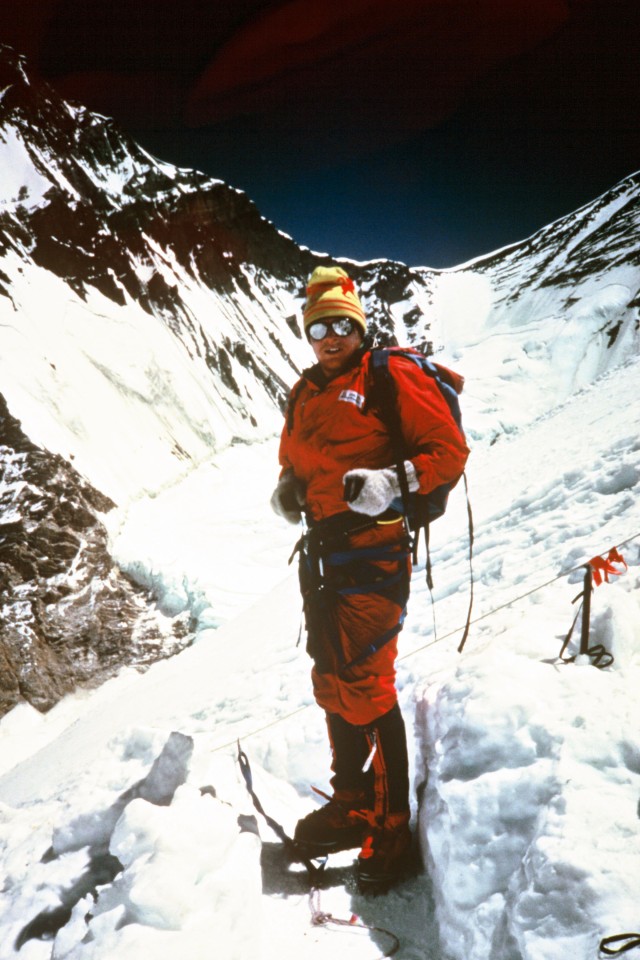 He decided to leave the RAF and wanted to become a guide, so off  he went to the Alps to climb the other North Faces. He and another friend were soling the North Face of the Matterhorn when he went off route and fell 1500 feet to the glacier. We were driving out for the weekend when we got told. stopped by a Police car on route to Braemar, we were all devastated. I had to tell the team and it was a solemn weekend. I went to see Al’s family next day in Blairgowerie, it was a hard experience. The family were devastated, they had lost such a son, they are such  great people and we had a very difficult time. We found out that Al had no Insurance for the Alps. This was a disaster at the time for the family. I was very lucky to get some great help from the RAF and we solved all the problems eventually. It was areal fight though but we got Al back home to the family. The funeral was an emotional day and a huge wake at RAF Leuchars Mountain Rescue Team but I was worn out and left the boys and all Al’s girlfriends celebrating Al’s life.

What a loss to his family and friends it has been hard over the years and how we all still miss him. I am sure Al could have achieved so much more if he had not been taken so early. I lost a great mate and the family a son and brother.  So please take care if out in the big hills,” make sure you look well to each step” and remember those who sit and wait for you. Enjoy the weather and if in the Alps ensure you have Insurance in case you have a problem.

I am off to Skye next week to Coruisk – a magical place  with great memories with big Al. He will be with me in my memories we all get older but the memories get stronger. Al McLeod RIP. 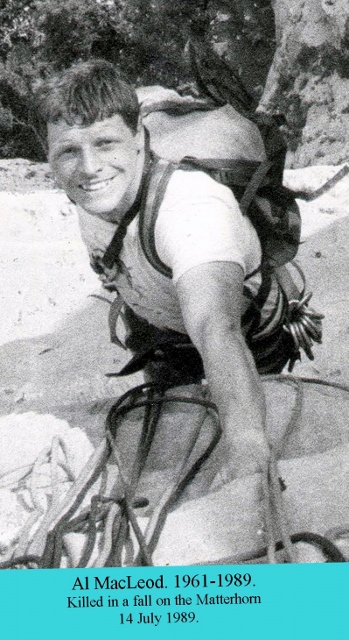