A visit to the Wellington Crash on An Lurg near Bynock Mor.

The position of the Wellington that crashed near the summit of An Lurg .763 just North of Bynock Mor.

It was a lovely day yesterday a bit windy and definitely a nip in the air, I manged to get a day out at last. We had a short drive to Glenmore after a leisurely start and wandered in the lovely walk past the green loch along the track to the site of the old Bynock Stables a bothy now gone. As always I should have cycled it but Yeni my companion was happy to walk and see how my back did. It is a grand walk and though it is only a few weeks since I have been out everything was so green and the heather just smelt of honey.  It was surprisingly cold with a biting wind at times and we only met a couple of bikers on this lovely walk. The green loch as usual is a lovely spot and only 20 minutes from Glenmore it was in the past an oasis of peace for some of  my many meetings there in the past. I would sneak out at times and have a lovely walk and get my head right. It was also a place to introduce past girlfriends to  the mountains as Bynock Mor is a great mountain to start on or finish a relationship!

The green loch well worth the short walk from Glenmore Lodge!

We stopped as usual at the site of the old Bynock Stables a place I have been glad to see on many a rescue. Strath Nethy is a remote place in winter and many make the epic navigation mistake and end up in this wild place. It is one of these places and was looking great yesterday with the hills looking green and peaceful. The path from here can take you into the wilds of the Cairngorms and we followed the  good path up on to the main ridge of Bynock Mor stopping to put the shorts away as it was getting cold in the wind.

It was cold on the way up and the shorts were changed early August yet many layers were needed!

From the ridge it is best to keep to the right hand side as you head to the featureless plateau of An Lurg. It is covered in peat hags but these were dry and it is about just over a kilometer to the crash site that we were heading to. In bad weather this is a really tricky area for navigation and can make a very interesting challenge  to find the Wellington Wreckage.  (Well worth a visit) This aircraft a Vickers Wellington HF16/A of 20 OTU took off from RAF Lossiemouth on a cross – country training Exercise and crashed on the plateau on An Lurg.  It crashed on 14 August 1944 all on board were killed.  The wreckage is widely scattered, parts that can be seen are the oxygen bottles, landing gear, engines and part of the aircraft geodetic framework.  We must never forget that these are tragic places where young men died. RAF Lossiemouth lost nearly 150 aircraft during the war! How many lives? 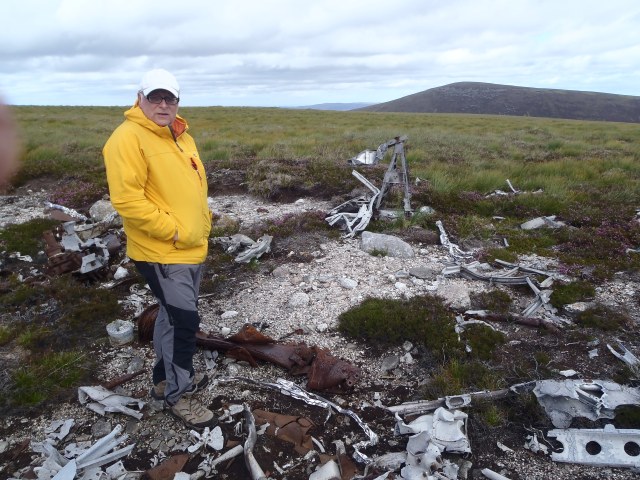 The Wreckage at the crash site.

The crew who died were:

The rough ground across the plateau did not help my back and I took it slowly,in and out of the peat hags. Soon we were there and saw the wreckage. We spent about 30 minutes at the site and then headed back, trying to pick a better line through the peat hags. I had to take a few painkillers as the back seized up on the way back and I must have moaned all the way home. We met a family from Germany heading up onto the by now very windy Bynock Mor with their 5-year-old son, they were off camping and the wee one was having fun by the river. Oh to be young again, we had a chat and left them to a fun few days out in the Cairngorms what a start in life that we fellow has. We were soon down at the car, the pills were kicking in and we headed to Aviemore to see two old friends Ray and Myrtle Sefton. Soon we were drinking tea and the “finest shortbread” in Scotland and then Ray another hero of mine took us through great days in the mountains and past rescues in the early days of rescue from the 1950’s -1990’s. I could have stayed all night but most of the shortbread was eaten and we headed home. More Tea at Yeni’s with Rosemary Yeni’s wife more blethering and then hobble home, off to doctor today but it was all worth it. Sorry for the moaning but great to be out again.