We are so lucky today as our equipment is so good and subject to testing and quality control. In the past mountaineering equipment was very basic yet great things were done with simple kit. Most of the gear was ex military and after the war there was plenty of ex military mountaineering equipment available. Ice axes were simple made mainly of wood and storage and care of them not really understood. There were various cases of axes breaking when used as belays at times with fatal results. After an attempt on Zero Gully in winter 1958 that resulted in an accident was noted by Hamish McInnes. He noted that the ice axes shafts were broken in belay positions below the crux. 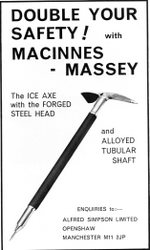 This accident happened on 9 April 1958 and was a key point in the work that made Hamish work on an  all metal ice axe. The rest is history.

We are so lucky in these days as many run up classic ice routes decrying many of them with the new gear all tested and safe as you can be. How these brave people in the past  pushed the boundaries with such basic gear and equipment and there were a few tragic accidents. We owe so much to those who came before. It is maybe time to have a look at your crampons and axes before the winter and check them to ensure all is as it should be. It does not take long but may help keep you safe. Worth remembering? 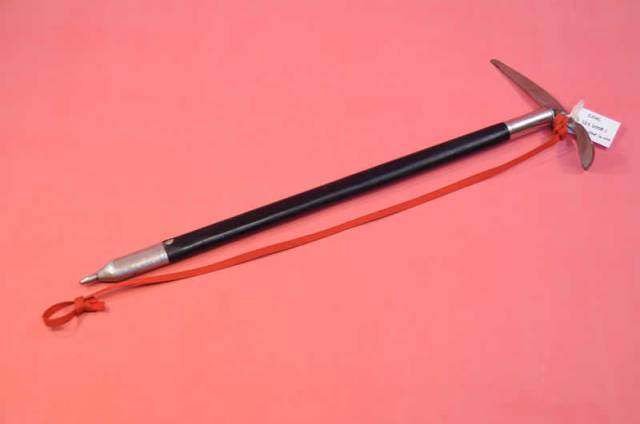 McInnes Massey – photo Scottish Mountain Heritage Collection. This was the ice axe I was issued with in 1971 it was nearly as heavy as me. We cut them down and made them smaller but still very heavy!