Posted on September 18, 2013 by heavywhalley.MBE

The walk in to the Base Camp then we say goodbye to the Porters. The North Face of Diran looking wild and the huge ridge of Rakaposhi an incredible area.

We were soon sorted at Base Camp and we were on our own, the Base was shared with some cows and a small Spanish Expedition. Our large group of trekkers were off and they had a wild time, we had a Cook (Sirdar) – Jaabad a cook boy and a Liaison Officer!  The plan was to set up an Advanced Base Camp (ABC) nearer the North Face Of Diran where we could get a better look at the route. It was incredibly hot and the weather ever changeable, we had a short period but we had to acclimatize first and the carry to the ABC at 4000 meters would help us all adjust to the altitude.   The Base camp was a good place with running water and a meadow incredible.

Food so important on a trip! The towel was due to a bad dose of tummy bug – most of us had it one of the problems with travelling in Pakistan.

Our route the North Face was huge but it hardly froze at night and we watched the Face for several days while we brought kit up. The other group went to work on the ridge a more technical route but again the conditions were very poor with lots of fresh and unconsolidated snow, very dangerous conditions. You cannot rush into these situations and have to be very careful these were huge mountains with massive dangers.

Advanced Base Camp.  The North Face a scary place to be!

Two teams on the same mountain caused problems and we tried to be share with the responsibilities among both teams. It was soon decided that one of the more experienced mountaineers would have to stay at Base Camp and organised the loads and food we were carrying up the hill. It was to much for our Sirdar Jabad who was also cooking for us. The mountain was a constant stream of avalanches and especially on our North Face was threatened by huge seracs and avalanches. The other team got to work on the ridge but were also encountering the same problems. They put up some fixed rope to get onto the ridge where they encountered more problems with the conditions. Even at night the ground hardly froze and every day huge avalanches poured of Rakaposhi and it even rained a bit! By now were were all acclimatized and the Advanced Base Camp was ready for the push up the North Face all we needed was a good weather window. We sat and waited for a break in the weather. The gear was in place for a lightweight ascent of the North Face and we had left some gear on face ready for when we had a weather window. The other group were just below the ridge and if the weather held and it got colder we may get a crack at the summit along way away! 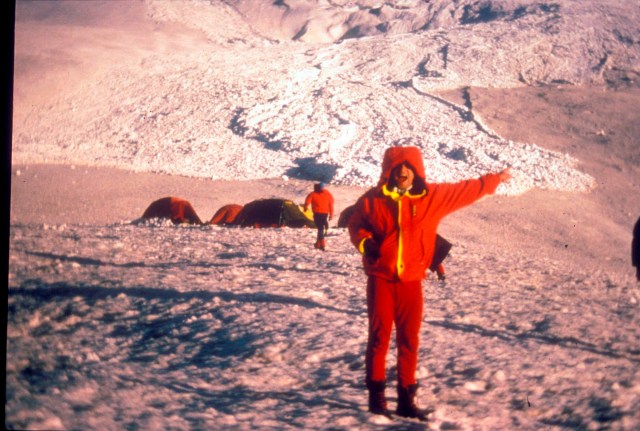 Too Close! Lets get out of here!

A huge avalanche hurtled down the Face and just stopped at the tents, that was a warning that the mountain was not ready for any visitors. A very worried group poured back into Base Camp and morale was very low but we were all alive. The big mountain had spoken! What happens next?

After the avalanche we regroup at Base Camp, a scary night! Decision time! To be continued!