This article was taken from some notes left and kept by my brother in Bermuda and found many years later. Unfortunately one page is missing, the first page but from the text the writer Rev W H Whalley (my father) has left a special tale of a great hill day in the wonderful Island Of Arran called by many who know and love the Island as “ a miniature Scotland” I would  think that it was written in  late 1948, four years before I was born.  Mum would have been at the (cottage Corriegills) with the family 4 kids! We must have been very young as we often went out on the hill as a family. It is something that has a big part on my life ever since.  My first memory is of a day on Goatfell aged about 4 and looking down and seeing lots of Navy ships in the bay.

Thanks Dad and Mum for all these great days!

Note in June 2013 the missing page has been found by my brother in Bermuda and completes the article.

Three days of continuous good weather with the Arran peaks etched clear on the skyline were to loud a call to resist.

Brodick was crowded with holiday makers but not one seemed bound for the tops. There were no sign, either of the haversacks and sticks of the ordinary hill walker or the hobnailed boots of the rock climber. Soon the crowds were passed and leaving the String Road, the abandoned kirk The Church has been deserted since a local union with its glassless windows, and roof open to the elements. So much part of the tree-stumped and fox gloved acre spoke of the generations of former worshippers and of the hand of time.

Following the path past a few cottages and a Scout camp ideally situated in a bend in the Rosa water, we were soon deep in Glen Rosa, well called the loveliest of the Arran Glens. The path follows the clear river, cutting through thick plantations: then plunges over a couple of stiles into the bracken where a couple of nose ringed bulls and their followers, grumblingly dispute the narrow right of way with the traveler, who kept a firm grip on his cudgel.

After a couple of miles the glen swings sharply to the North and the foreground is filled in a perfect picture with the precipitous three – pronged mass of Cir Mhor, calling up in an instant the memories of Galloway’s Curlywee.   The camera is indicated and used.

Right up to the Goatfell- Cir Mhor saddle at the head of the Glen. Cir Mhor dominated the valley and called so loudly to be climbed, that the very modest plan of Ben Tarsuinn and Ben Nuis was extended to include the ridge walk from Cir Mhor.

In the upper stretches of Glen Rosa, the Goatfell massif closes in on the East with its corries and ridges, Cir Mhor to the north, A Chir and Beinn a Chliabhain to the west. With only a narrow outlet to the South, it is difficult to realise in this lonely mountain fastness that five miles away as the crow flies hundreds of folk are basking on Brodick beach!

From the Saddle, Glen Sannox looked wild, gloomy, and desolate. Then the steady pull up Cir Mhor began. All looked simple except for the final pinnacles, which from the distance looked as so many other summits have looked unclimbale. Climbing up wind I had the good fortune to come on a hind at about 20 yards. She gave me a long and steady once over, then made off, equally unhurriedly.

When I reached the final stretch a bit of circling round seemed to show that there was no way up without the gymnastics which are the stock and trade of the mountaineer rather than that of the ordinary hillwalker.  So gymnastics it had to be! For the final time since Stuc a Chroin, nine years ago here was a case, where a stick was not a help but a hindrance. Arms and legs were all needed, and altogether! So the stick was thrown up ahead or jammed in a cleft as a hand grip! And up we went with the scratches of climbers nails on the granite as a guide. In an hour from the Saddle, it was over and well worth it. 2600 feet below the Clyde Estuary was spread out like a map – Bute and the Cumbraes, with a couple of warships manoeuvring at speed. They looked like 2 inch scale models, leaving a white wake behind them in the calm sea. To the East the Ayrshire coast slightly haze covered. Almost the whole of Arran, to the far North line upon line of the Highland hills to the West Kintyre – Islay – Jura. Even in the sunshine the wind was cold and strong at this height, but a granite boulder provided both shelter and back – rest and gave the idyllic satisfaction of eating ones lunch, on top of the world, looking down on a magnificent panorama.

Soon it was time to be moving A’ Chir looked grim and grim it was. The hobnailed tracks showed clearly on the grey granite. It was a climber’s route and no place for sticks or cameras and very often a place for a companions helping hand. After a time of careful surveying of each difficulty, of sending the trusty stick ahead, or below, as an advance guard, of heaving, clinging, creeping and resting. The summit of A ‘Chir was achieved. The descent to Coire Daingean on the Rosa side is precipitous and awe inspiring, and only slightly better than the Iorsa side. I recall the apt words of a recent writer about this ridge, “ Upon the Iorsa side , it descends steeply, and the Rosa side is a continued precipitous”   The river here was the same magnificent sweep as from Cir Mhor with perhaps a little more prominence to barren Glen Iorsa and the west coast of the island.

A little more food (the crushed and crumbled digestive biscuits tasted good here) a correction of a recalcitrant watch, based on the tiny Glen Sannox leaving Brodick Pier, 5 miles away and 2000 feet below. Five minutes rest then further up the ridge to Beinn Tarsuinn (the transverse hill) more scrambling down the with a real thankfulness here for a stout stick; more skirting of difficult stretches and a comparatively easy ascent to the highest summit of the day (2706 feet). Here was a knife edged precipice, where face down one peered over the edge of Corrie a Bhradain many hundreds of feet below. 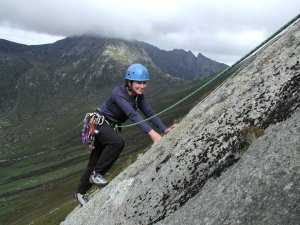 Ben Nuis the (hill of the fawns) 2597 feet seemed quite near and proved an easy walk, the sloping pyramid appearance as seen from the south east , being quite indiscernible. After one long final look round the magnificent scene, the descent into Coire a Bhradain proved fairly easily, although the stretch from Garbh Alt back to Glen Rosa was through four feet bracken, thick stubborn and unyielding. Reaching the path midway up Glen Rosa the first signs of human life  for 7 and a half hours were seen two climbers spying out the land for the tomorrow – then a lad swimming in a cool burn pool –  a few evening strollers , then the crowds of Brodick and again the last quiet stretches up the Corriegills road.

I have just copied this from the notes left by my father I would imagine in early 1950. I know this area very well and it was great to read of his joy all these years ago. I was in Arran climbing in August 2007 on one of my last weekends with the RAF Kinloss Mountain Rescue Team just before I retired. I climbed Cir Mhor by way of one of the most famous climbs in Arran South Ridge Direct it was my 4 th time on this classic . This climb takes an improbable line right up the main face and wonder what Dad would have made of it, with his stick! The rough pink granite is amazing to climb and you can never tire of this special place.  This was a great day climbed with one of my best friends Kenny who was in the Mountain Rescue with me. We left early to beat the crowds, there were none about and we had this magnificent cliff and Glen walk to ourselves, little has changed in all these years. Even the Cattle are still there! We also saw hinds probably relatives of what Dad saw all these years ago. I always enjoy the walk down Glen Rosa a wonderful place, the burn flowing clear and the pools where we often stopped for a swim or paddle as a family. Arran as Dad says is in our hearts and you never have a bad day on these wonderful mountains.  As a family we spent many days on the Arran ridges climbing all the hills many times. Not an easy task with 5 children! I was lucky to climb the complete ridge with my Dad in one go when I was 15 and have climbed in Arran most years ever since.

I have never forgotten these early days with my Mum and Dad which were part of my education in my love the mountains and wild places. Arran is a special place for me and I have great memories of very special people, which makes this island so unique.

Arran in the depths Labyrinth!

I regularly revisited this magic place and even enjoy the golf, I have been invited over to the Arran Mountain Rescue 50 th Anniversary and to give a chat to these great people in November. What an honour and I will be over before that to enjoy this wonderful Island and its many memories.

Sadly I was ill and had to miss the chance to be with the Arran Team at their 50 th. This year in 2017 I will be talking for a fundraiser for the Arran Mountain Festival on August 9 th at Lamlash village Hall. What a priveledge that will be!

As my Dad says my heart like his is always in the mountains and Arran especially ! See you this August.

Thanks Dad and Mum, I was so lucky, wait till my grand daughters get over to Arran and see this great place, I love ❤️ Arran.

Mountain Rescue Specialist. Environmentalist. Spent 37 years with RAF Mountain Rescue and 3 years with a civilian Team . Still an active Mountaineer when body slows, loves the wild places.
View all posts by heavywhalley.MBE →
This entry was posted in Family, Friends, Mountaineering. Bookmark the permalink.