Boots and gear how far have they come on over the years.

When I started on the hills with my Mum,Dad and family our kit was so basic, money was very tight and we wore what we had and still had great times. Dad never wore boots always shoes and bought my first pair of Hawkins boots with my money from my paper round in the mid 60’s. 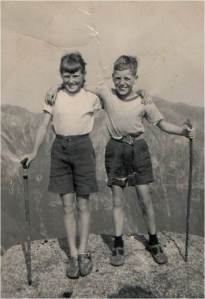 If you look at the picture below you will see how little gear we had. I am wearing my anorak that I paid for from my paper round and wore everywhere and Dad is in a shirt and a jumper round his waist!  He has his map and stick as always, we had so little gear, we must have been as hard as nails. We had little hill bags with lunch and a brew always a bar of chocolate and maybe a spare jumper.

When I joined the RAF Mountain Rescue Team it was incredible the gear we got, looking back it was very basic and the boots in the photo Curlies were incredible and what I wore for several years.  Below is the Curlies boot a really light and comfortable boot in summer but very cold in winter. I wore an extra 2 sizes in winter with 3 pairs of socks. I still have cold feet thinking about them. They were wonderful for big long walking days, like the Mamores, Fannichs ridges, so comfortable and light. Crampons were heated and bent to the boots for winter in workshops and we climbed in them, things like Tower Ridge, Red Gully and various other climbs.  We used them to rock climb as well and you were not allowed rock boots until you climbed at least very difficult climbs in Curlies! After two winters I bought my own boots well worth the cost and also a lot of my own gear, from jackets, crampons and clothing, I spent a lot of my wages on this great sport.  Yet I kept my Curlies and did my first traverse of Scotland in May 1976 wearing them, they were soaked most days like us and the cold feet in the morning still gives me the shivers. No decent insoles and the odd nail came through but on a good summers day they were a grand pair of boots and I wore many pairs out.

The famous Curlies – My first pair of hill boots. Light and great in summer but in winter so cold and they used to freeze up!

The rest of the kit was basic the Yellow Cagoule was so big and never kept the rain out but it was light!e just been told by that RAF MR Legend Ray Sefton the Laird of Aviemore that the yellow cagoule was developed by the civil servants for the RAF. It was designed to fit over your rucksack as a hood? I was never told that and if the wind caught it it filled up like a balloon and off you went.   It was designed by a Service  Defence Agency who did such things, there were far better jackets on the market but this was 1960 -70’s. There we go a bit more to the gear tale.   As was the Pixie smock a relic from Scott’s travels in Arctic a very thin canvas top with a huge hood that fitted over a helmet. I still have one I loved that piece of kit! 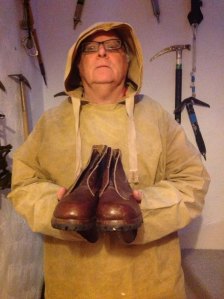 The hairy breeks we were issued with froze up like armour in winter and wore a rash on your legs in the rain or hot days. Underneath we had long johns RAF issue, huge always size Large. I wore pajamas underneath in winter as everything was so big. We also had Ventile jackets which were heavy but very effective at the time, with good pockets for maps and bits and pieces.  The aircrew socks were huge as well about 2 sizes too big and caused big problems when wet. The dye ran out into other clothes, great days and the aircrew shirt that froze on you was also part of the layering system.

The gear got better though and we modified kit with our friends in Safety equipment making various jackets with map pockets and wired hoods that caught on commercially. They also made lots of gear tops and smocks out of old parachute materiel and early wind – suits that were all the rage in the 80’s.

1976 CIC Hut Ben Nevis  Call – out  we were always putting on wet kit after a call- out or day on the hill.

The orange Helly Hanson Jacket was great but the condensation was awful but very hard wearing look at the length of it on me.

When you look at the very early gear used by mountaineers and the team much was ex WD kit from the war. They had some simple gear much was old uniforms and only a few had crampons that were not great but what a job they did. Look at the gear nowadays and see the difference.

Things have moved on the gear is so much better. I will never forget buying one of the first polar jumpers for our walk across Scotland in 1976, what a bit of gear and how we loved them. The gear revolution had started and what changes occurred,