Out for another slow walk in the Cairngorms to Braeriach and its aircraft crashes .

Posted on September 29, 2015 by heavywhalley.MBE

It is an early start for a wander into the Cairngorms hopefully to Braeriach area just above the Larig Ghru. I have been here many times often on big wanders on these hills which will soon be snow covered.   The weather is superb and another good forecast and hopefully my slow improving fitness will allow me to have a look for two aircraft the crashed here during the war. One of the aircraft a Bristol Blenheim Mk IV Z7356 crashed near the summit of Sron na Larig and much of the aircraft remains in the Corrie. Sadly all 6 of the crew were killed.

The other aircraft details are  On 12th October 1943, Airspeed Oxford HM724 took off from RAF Leanach (Relief Landing Ground for RAF Dalcross near Inverness in north-east Scotland. On board were a Pilot Instructor, a Pilot under training (u/t), and two non-operational airmen.

During the flight over the Cairngorm Mountains, however, the aircraft stalled and crashed at Braeriach‒Sròn na Larig. All on board survived!

The Lairig Ghru in the Cairngorms is often portrayed and many know it can be the most hazardous crossing in the Cairngorms and the provision of shelter at its northern portal to complement that of Corrour Bothy to the south, led to the building of the Sinclair Hut. It was at the time a most basic concrete structure and as such I always regarded it as comfortless and inhospitable but nonetheless a haven for exhausted walkers should they underestimate the crossing and get caught in the fierce blasts of a cold winter’s day. This too has now gone taken down years ago.At the end of the winter and the RAF Helicopters would combine a training day and visit many of the bothies drop us of and we would take the rubbish away, left by lazy walkers.  It was at times full of rubbish and even worse used as a toilet and became an eyesore too many. We had used this  hut on many occasions on Rescues in the past and despite its Spartan appearance and gave us a few minutes of respite on some hard searches. My friend Neil Reid writes well on the Cairngorm Bothies and his blog is well worth a read! 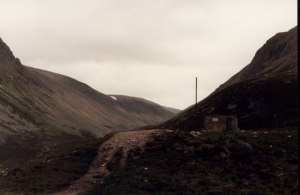 The now long gone Sinclair Hut – where my big mate Laurry Skudas met his lovely wife – who says this bothy was Spartan and comfort-less?

Anyway I had better get off and pick up a long time pal – Tom Mac Donald who was on the RAF Kinloss Team with me in 1972. We completed our Munros on the same day in 1976 on different hills.  We will have a lot to chat about if Tom lets me catch up.

2 Responses to Out for another slow walk in the Cairngorms to Braeriach and its aircraft crashes .