The bairns were talking about ice screws and cannot believe what we used to use! In Scotland I rarely used them till I went to Canada in 1983 and then we could not believe how good the ice was and how limited our gear was then. When you see what we had in the 70,s and before that it is incredible.

The cork screw ice screw was a simple piece of kit and well worth a look if you get a chance how simple it was and how thin if you fell on it!   When we first went to Canada and am sure we had 4 ice screws each this is what we had. That meant average 6 – 8 screws each pitch , 2 for belay and 3 -4 fir protection and 2 for belay.  There was limited belays in these early days and most were ice screws or tubed piping that were used by the locals. We ran out of abseil tat on the first week of a 5 week trip. 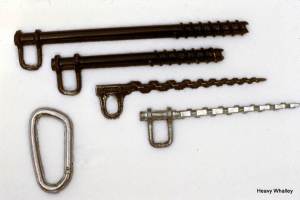 1983 Canada Gear – simple and not enough for each pitch.

Our lives were saved by the purchase of a few Snarg ice screws at a huge cost on my Access card – yes in 1983 . They saved the day and what a great advance they were and so easy to use to put in and take out compared with what we had. 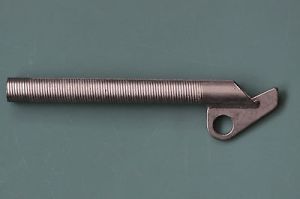 The Snarg what a bit of gear at the time.

We had taken lost of rock gear and pegs which we hardly used ice screws and tat for the trees were the  main belays. The Snarg ice piton/screw. Cylindrical hollow tube with cut out slot and wedge shaped hangar.

The Terror and the Gully axe!

The ice axe above on the left is the famous Hamish Mc Innes Terrordactyl known as the “Terror” by a generation of winter climbers. The other was a cut down Gully axe that climbed many famous routes. The Terror was a  great invention and it was nowhere used more proficiently than in Canada where Bugs Mc Keith used them to the their full potential on vertical ice, using them for direct aid, very brave! This was the late 70’s

The Terror and ice screw.

He writes “On two previous occasions faced by pillars of vertical ice and lacking the guts to front-point up them. I had attached old slings to my the shafts and found I could relax even on vertical ice and spend as much time as I wished clearing the rotten ice and placing each axe alternately to my complete satisfaction.”

Less than 100 routes in the guide.

I went to Canada in 1983 one of the first trips ever by Scottish climbers. It was a trip into the unknown and there were less than 100 winter climbs at that time in the area.

We took some other axes with us and used the Chounaird Zeros a wonderful axe and hammer see below. We managed about 25 routes some of the best at the time and what a trip. 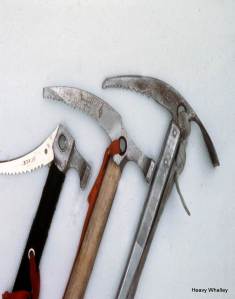 The “hummingbird was another it was awful and nearly wiped me out on Guinness Stout! I left my axes at the top of Guinness gully the local guide brought them back to the Alpine Club when he found them, what a great guy. The picture below is a pair of bamboo shafted Zeros, worth a few pounds now, the thud and the judder of them on good ice was so reassuring. Nowadays they look so primitive and when I climbed with a pair with a pal a few years ago a young gun asked if I had made them myself!

As for our crampons that is another story for tomorrows blog ? I found this picture of a belay would you abseil of this? This was on Guinness Gully at Field what a place to be.