Posted on February 24, 2016 by heavywhalley.MBE

A few days ago at Last I bought Film Operation Moffat from Steep Edge Films and really enjoyed it a short film and an insight into Gwen Moffat the UK’s first Female Mountain Guide. It is  a short film by Jen Randall of Light Shed Pictures  and tells us about the making of her latest project for BMC TV, Operation Moffat. It is a grand film and Gwen is still as sharp as ever at 91 and it gives  a  short insight into this incredible ladies life. I loved it and to see Gwen looking so well was magic and this short insight into an incredible woman is recommended. I wish we could have heard more about her life but I enjoyed the film and the enthusiasm of the film makers, their joy in the making of it was easily seen.  – You can purchase it at http://steepedge.com 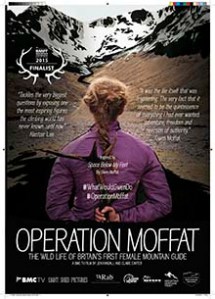 Gwen Moffat has always been an incredible person to me  and I was lucky enough to meet her at the 50 th Anniversary Of RAF Mountain Rescue. It was her other story of a women in a man’s world of  climbing and living life to full, her life story or part of it is in the other classic book Space between my feet. This was written many years ago but what a pioneer she was. These were hard days and one it is hard to understand how women were treated in these dark days. This was in the late 50’s and 60’s and is some tale and how these days have moved on from what we have now. Her climbing in bare feet and holding her own in a man’s world in these days was extraordinary for the time. 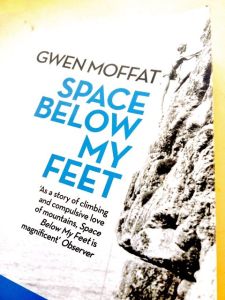 Gwen has moved on and has inspired generations in her books and her life, it is great to see her being acknowledged after all these years. Well done to the BMC for the Film of this inspirational woman. She is to many who love the mountains a true mountain character and the film shows the love and the life she has led, the film does her proud. The film did not mention her part in Mountain Rescue and another great book “Two Star Red” an early insight into RAF Mountain Rescue and her early days with late Johnnie Lees to whom she was married to.

I always tried to give the girls in the RAF Mountain Rescue teams an insight into her life by telling them about this inspirational lady and lending them her book.  She is and always will be a true mountaineering legend in my mind and many others.

Thanks again I loved the film and it looked like the girls involved who filmed and produced it did to.

4 Responses to Operation Moffat – a short film about Britains First Female Mountain Guide. I enjoyed it!