The signs were there a snowy walk in Torridon.Lessons Learned!

Posted on February 26, 2016 by heavywhalley.MBE 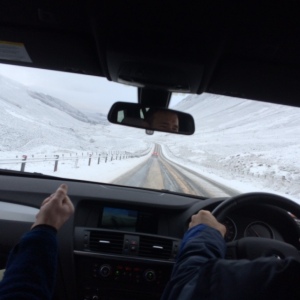 The boys Pete and Dan arrived at 0700 and off we went for a wander in Torridon, the signs were there as the cars coming into Inverness  were covered with snow and the further West we went there was a lot of snow on the hills. I live by the sea so its another world and there was no snow at home!. I had read the Avalanche report for Torridon a new full 7 day service this winter and missed this bit “Deep snow above 450m – hard going on foot. Knee deep at 600m” The deer were down low on the way there were so many over a hundred and the trees plastered on the hills.  Dan had seen the pictures on the Avalanche Blog and the area we had planned looked pretty doggy as the approach to the Black Carlins on Beinn Eighe  was right in “Considerable”  Avalanche Territory! On reaching Kinlochewe we had a good look at the hills and changed the plan. The signs were all there and we had noticed them and adjusted the day accordingly We could see some big cornices high up.

Change of plan – the right idea.

We decided to wander in from the Coire Dubh car park which was very busy, the Ling Hut is nearby and many use it in winter. It was clear that many would be climbing on the classic Corries of Liathach and there may be a path broken in the new snow. Most would have had an early start as it can be a long day to climb these routes and we soon set off the views were stunning and the path in a good state but there was plenty of snow.

The Classic light with the Corbett Sgurr Dubh 782 metres and plenty of fresh snow.

It is a great walk and the glen has Beinn Eighe and Lithach two Torridonian giants towering above, plastered in fresh snow and the ridges snow covered and imposing. The huge  buttress and gullies are impressive in the snow and there is so much potential yet most of the ice climbers head for the classic lines in the wild corries of Lithach. The blogs and forums on the internet draw them as the routes come into condition and the news spreads. This is now a busy place, thankfully only  in the popular Corries and there is still so much other places to go.  We stopped so often looking at the great cliffs and the ever changing light and as always talking of past climbs, not today though we could see a few climbing they would have had and early start as it is two hour climb into the routes. 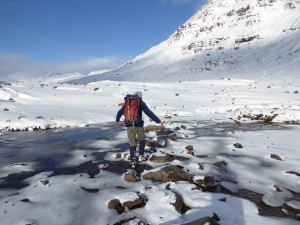 Pete at the river.

The river was easy to cross a bit icy but there was so much to see and we wish we had brought a guide-book as the memory was a bit poor on the lines of past climbs. The big snow fields at the top of the gullies would need care with all this fresh snow and there was no wind at all and quite warm. They would have a long day as the snow would be hard work in places , we were glad we were just out for a walk and could enjoy these incredible views and the wild corries and take our time, the joys of being older? 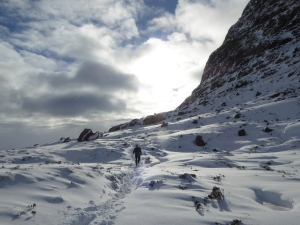 The path was easy till it breaks to Coire Mhic Fearrachar then it was really hard work as the fresh snow was deep.  We changed over breaking steps a bit each taking a turn in front but it was so deep in places so we kept stopping. At every break there were so many great views and we could now see climbers on Poachers Fall a classic ice climb in the Corrie. The views get better and better every step and the sun was out and all the times these great hills dwarf you and this is wild country.

The Big Corries wild and snowy.

The path was hard work even for “Dan the man” the Himalayas hero and we followed in his wake the path was well buried and we made our own and the Northern Pinnacles came into view. they looked so Alpine. As we rounded the huge bulk of Sail Mor  and we saw the family of deer and a couple of Ptarmigan as we left the main path and headed for Corrie Mhic Fhearachair.

The weather started to close in now and the mist came down and we saw an eagle soaring above the ridge line of Sail Mor. It was pretty hard going yet at least we were making a path for climbers over the next few days as the conditions would be fairly settled. The Avalanche forecast and information was right knee-deep snow in places, hard going of the path!  We had a break and discussed the day! 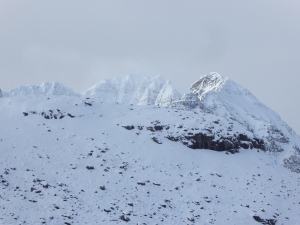 It had been slow progress and now with limited views so we decide to turn back an easy decision.We had been walking for about 3 hours with plenty of stops but with no views and deep snow still fun. This time last year the snow would have stopped me earlier and I am taking it easy and was enjoying the day. 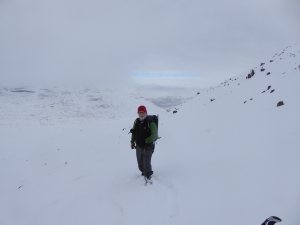 Cloud coming down. Time to go?

The way back was a lot easier but still knee wrenching and the odd slip on the hidden rocks but a lot of fun and longer than we all thought. We still got the odd view and always reminded that this is wild country with few paths and in these conditions very hard going.

There had been a slight thaw as well but the views were still a bit clouded until we got lower down the path. We still stopped and enjoyed the views bleathering all the way down. It is a special place  surrounded by these great hills, we had only seen another couple all day walking through the glen to Torridon. We had not made the great Corrie and the view of the Triple Buttress but there would hopefully be other day?

Deep snow as the forecast said!

At the car park I met Shamus one of the local Torridon MRT and we had a catch up and then a quick change and stopped at the Whistle Stop Cafe in Kinlochewe. This cafe is in the old village hall where we used to stay with the RAF Mountain Rescue Teams  many years ago when young and fit. We had a great bacon roll and the finest brew of tea ever a great cafe and open this winter. We then told more tales of climbs and winter traverses of both Liatahach and Beinn Eighe all the Munros in day many years ago!

In came another pal Eoghainn Mac Lean a past Team Leader of Torridon MRT and superb wildlife photographer. His website and local knowledge is incredible and his photos a joy of the local area and its wildlife. He was as always  full of the joys after a day out in the hills we had a great chat and then headed home. 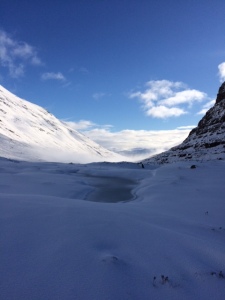 Thanks to Dan and Pete. It was an enjoyable day in wonderful surrounds no summits but just the wildness of the Torridon mountains and the fantastic West of Scotland!

Unseen from the road, the majestic cliffs are hidden.

The long walk, views expanding as we climb.

Liathach brooding in the mist, is watching?

As usual we meet a family of deer

They have been there for many years

What have they seen?

Wreckage, glinting in the sun.

This is a wonderful poignant place.

Only too those who look and see.

How mighty is this corrie?

2 Responses to The signs were there a snowy walk in Torridon.Lessons Learned!