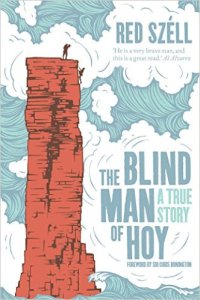 The Blind Man of Hoy.

The Old man of Hoy is some place and I got this book at Christmas and was saving it. I really enjoyed it and is the tale of the first Blind person to climb the classic climb. The Old Man of Hoy is located of the Orkney Islands and is a pillar of red sandstone standing on a plinth of basalt and is 449 feet high. It was first climbed in 1966  by a group of famous climbers and was watched live on television by about 15 million people. I have visited Hoy on several occasions and even landed on the top by Sea King in my days with RAF Mountain Rescue. This place means a lot to me as after a great friend died of Cancer RAF Mountain Rescue the Team left a small climbs book on the summit. Scotty climbed The Old Man in the 80’s with some of the stars of the day and as a mark of respect the troops left a little climbs book on the summit. When it was completed it was returned to RAF Kinloss it was then a pretty battered book, sodden book that had seen some weather. I wanted it to go to the National library in Scotland but the RAF in its wisdom said no and I was lucky I took a poor copy of it as it was lost and may even lie in some MOD room somewhere or was probably thrown out by some moderniser or two-year wonder. ( The world is the next two years and nothing else matters at times in the RAF)  It has some great tales in it and the inscription inside is magic. The Old man has many memories and we had a great exercise with the local Coastguards in the mid 70’s to help them assist in the event of an injured climber on the stac! What a few nights that was on Hoy and some wild tales of these early days. There was a plan at one time in case of a problem on the Old Man that a team of Rescue experts would be flown in from the mainland out to assist in an evacuation. This is why if you climb on this wild place you must be able to self evacuate not easy if the weather or an accident happens.

We also had a few ascents including a planned night bivy stop on the summit by one of the troops and a wild storm came out of nowhere and the ropes were frayed as he abseiled of in a hypothermia state!   My pension was in doubt there as it was a close run thing, you cannot mess with this place and never relax till your down. 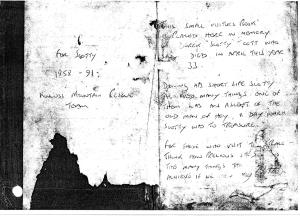 The Battered Visitors Book on the Old Man Of Hoy

This small visitor’s book is placed in memory of Derek “Scotty” Scott who sadly died in April this year (1991) aged 33. 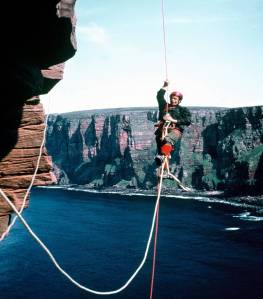 During his short life Scotty achieved many things one of them was an ascent of the Old Man Of Hoy, a day which Scotty was to treasure. 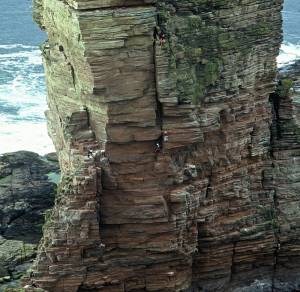 Hoy the troops in action.

“For those who visit this place thinks how precious life is and the many things that you can achieve if we work together!

The original line up the stack. Takes the landward face and is essentially a crack climb therefore large cams and hexentrics are useful as are 60m ropes for the descent.

This is from Red Szell book

“From the moment I watched a documentary of Chris Bonington and Tom Patey climb the perpendicular flanks of the Old Man of Hoy I knew that my life would not be complete until I had followed in their footholds. That was in 1983 when I was thirteen. Within months I was tackling my first crags and dreaming of standing atop Europe’s tallest sea stack with the Atlantic pounding 450 feet below. Those dreams went dark at nineteen when I learned I was going blind. I hung up my harness for twenty years and tried to 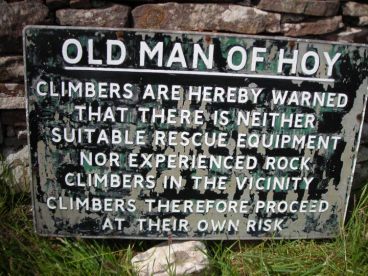 I felt every time The Old Man appeared on TV.’ Middle aged, by now a family man, crime novelist and occasional radio personality, Red Szell’s life nonetheless felt incomplete. He was still climbing, but only indoors until he shared his old, unforgotten, dream with his buddies, Matthew and Andres, and it became obvious that an attempt had to be made. With the help of mountain guides Martin Moran and Nick Carter, and adventure cameraman Keith Partridge, supported by family and an ever-growing following, Red set out to confront the Orcadian giant”

I enjoyed the book and how Red and his team managed to climb the Old Man. His Guides Martin Moran , Nick Carter and all filmed by Keith Partridge is a great account of a grand adventure. Red was in safe hands throughout what a team in support and I enjoyed this book and the preparation involved before the climb took place. In all a good read and recommended.

2 Responses to The Blind Man of Hoy – Red Szell. The Lost Visitors Book?