My old mate Mark Cheeky Sinclair RIP and Ray Sharon at Sheneval bothy with a grand fire on.

It’s great when you find an old photo that sirs the memories like the one above of wonderful bothy days and night with great pals. Mark in the photo is no longer with us killed on Lochnagar many years ago with another top pal Neil Main after a climbing accident, a sad time in my life in March 1995. The photo above sums Mark up full of fine and lived to climb. He loved Alaska and a few days before he was killed he gave me a huge photo of Denali Inspired by Bradford Washburn  whose photos of Alaska of that wonderful peak are breathtaking. Mark and Neil he had climbed in that wild area and loved it, what a pair they were. Mark and Neil would love the book I am reading just now.

“Man, the only – only – good thing about that climb was that you were tied on to the other end of the rope.’ Simon McCartney was a cocky young British alpinist climbing many of the hardest routes in the Alps during the late seventies, but it was a chance meeting in Chamonix in 1977 with Californian ‘Stonemaster’ Jack Roberts that would dramatically change both their lives – and almost end Simon’s. Inspired by a Bradford Washburn photograph published in Mountain magazine, their first objective was the 5,500-foot north face of Mount Huntington, one of the most dangerous walls in the Alaska Range. The result was a route so hard and serious that for decades nobody believed they had climbed it – it is still un – repeated to this day. Then, raising the bar even higher, they made the first ascent of the south-west face of Denali, a climb that would prove almost fatal for Simon, and one which would break the bond between him and climbing, separating the two young climbers for over three decades. But the bond between Simon and Jack couldn’t remain dormant forever.A lifetime later, a chance re-connection with Jack gave Simon the chance to bury the ghosts of what happened high on Denali, when he had faced almost certain death.”

alaska-tent-clear-after-storm- we had some wild storms on our trip that we interesting but nothing like the tale in the Bond.

I have had great days on a big mountains and Alaska was special my thoughts of Neil and Mark how they would have loved to be climbing today with all the new and improved gear. So as the winter draws in take care in all you do and enjoy the mountains in winter at their finest. 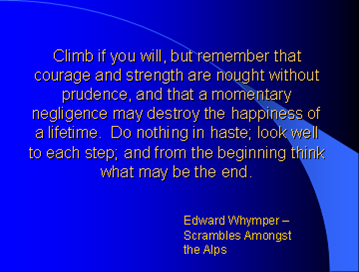