I met some wild characters in my time and when I was down in St Athans in South Wales in 1979 doing my driving course that seamed to take years. (I was not the best driver and still am not) I was the Deputy Team Leader of RAF Valley  Mountain Rescue in North Wales and my mate Tom Mac Donald was the Deputy Team Leader at St Athans in South Wales. I had a great time and that is when I met Andy Watkins. I managed to stay in the team accommodation at St Athan and shared a room with Andy. He was some room-mate and we ended up great pals. He would always climb in the room window and never used the door but became an incredible climber and friend. He has climbed all over the world from these early days with lots of my pals and what a man and the tales of this tough character is endless.

Years later we met many times he became a hugely accomplished winter climber and soled so many of Scotland’s big routes when he moved up to Lossiemouth in Scotland. He climbed with little gear and always in a battered pair of Ron Hill trainers and little else.  I met him as I running the RAF  Mountain Rescue Winter Course in 1990 as we were coming of the hill and he and a pal were off at 1700 to climb on Shelterstone  Crag that night. I gave him my crampons as his were in that bad a state! He would meet us mostly soloing the big routes In  Scotland  and the four ridges on Ben Nevis in day in winter are seldom done.  Tower Ridge, Observatory Ridge, North East Buttress and Castle Ridge it was a tour de force at the time by Andy and he was with a young climber from the RAF. He was still dressed in the same gear and still with his old crampons. He had many adventures and introduced many new mountaineers to the wild world of winter climbing and to be fair he is a bit of a  legend in our small world. How many can remember a day with Andy, it was in the early days of “light and fast”. I would love to hear some of the stories again as you only meet a few Andy’s in your life. 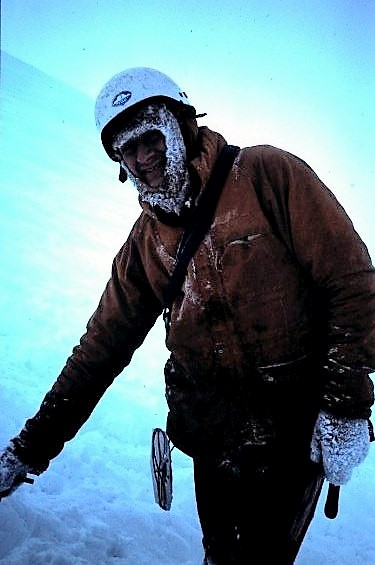 1983 Andy Watkins winter course photo Eric Hollister. It must be cold as he has a jacket on.

He left the RAF and ended up in the oil industry and we kept meeting him on the hills and climbs and he still had the same gear on.   Then sadlyover 17 years ago he was knocked of his bike and had a serious brain injury where his life changed dramatically. I last saw him when I was at Innsworth near Gloucster when I was posted there in 2003/2004 Andy was in hospital in Bristol and I regularly visited.  It was a tragic time and I felt so much for my old pal and took a few pals along whenever I could . I could not believe that a man who climbed so hard could be so badly injured on a bike it was awful and I visited Andy often for two years..

Andy after many years got a move to the The Queen Alexandra Hospital Home
Boundary Road | Worthing | West Sussex | BN11 4LJ where he is well looked after.

I get a card from Andy every year at Christmas and send him the odd letter but we lost touch recently but I was delighted to read this on his Facebook Page as I was going to write him a letter to get back in touch/.

Andy Watkins – “Sixteen years ago, ex-RAF airman, Andy, acquired a serious brain injury when he was knocked off his bicycle, leaving him with limited use of his arms and unable to walk.

Before his accident, Andy was a keen mountaineer who had scaled El Capitan in Yosemite National Park; but now he faced his biggest challenge yet.

With intensive physiotherapy and hydrotherapy, Andy made amazing progress. He regained some movement and improved his posture, and in the first few years of being at QAHH, he had regained greater autonomy in daily life.

He is now independent in accessing the local community in his powered wheelchair, and he is frequently seen on the promenade heading to Worthing town centre or to a chosen restaurant on good-weather days.

With the achievement of his personal goals he remained motivated to succeed in other areas; he hosted a weekly ‘Classical Music Appreciation Group’ for his fellow residents, conducted a presentation of his past mountaineering pursuits, and he now also runs a weekly curry night in partnership with a local Indian restaurant.

Play the QAHH Lottery to support Andy and our other residents.”

Peru Expedition – This picture was taken when we were on “exercise Huayhuash 85 — with Tom MacDonald, Mark Sinclair (RIP), Pam Ayres, Jock Cameron and Pete

Hopefully I will visit Andy one day and I am so glad and proud of his achievements especially how he is today. Andy your true mountain character has come through all these hard years and I hope Andy’s pals read this and contact or if they can visit him. I will do Andy on my forays to the Deep South.

Many thanks to l The Queen Alexandra Hospital Home
Boundary Road | Worthing | West Sussex | BN11 4LJ for all they do for the patients. God bless you all.

“It is the mission of The Queen Alexandra Hospital Home to provide a multi-disciplinary approach for the care and rehabilitation of those with Neurological and medical disabilities, predominantly for those who have served with HM Forces.”

The Queen Alexandra Hospital Home is very proud of the level of professional care we administer to our residents. We have at our core, the values of Privacy, Dignity, Rights, Independence, Choice and Fulfillment. We also value our stance of providing a home-from-home environment to help avoid institutionalisation and to keep residents focused on the future.

There are many different types of nursing care undertaken throughout the Hospital Home that are reflective of the disabilities suffered by our residents. We have residents with motor neurone disease, central nervous system disease, Acquired Brain Injuries (ABI) and spinal injuries. Not only is each type of illness different but each individual is different too.

We emphasise rehabilitation and where possible get residents to a point where they are able to cope living in the wider community and on their own.