A grand day in Coire an Lochan in the Cairngorms with the Moray Mountaineering Club.

Posted on February 20, 2017 by heavywhalley.MBE

It was the Annual Winter Skills day for the Moray Club and as always we go by Bus to the Cairngorms, stopping en – route in Elgin. Forres and Inverness for member’s pick ups. It has been a poor winter for snow and things were not looking great but having run RAF Mountain Rescue Winter Courses for many years in the past I knew I would find enough to give some a taster of the winter. The were just over 20 on the bus with two meeting us in the car park. They had travelled from Banff and Kinross and the plan for the day was made once we sorted out how many fancied the skills day. Ray Harron who along with Sandy Allan in the past has run these skill days but Sandy was not available and I had helped in the past and we had 10 willing volunteers. The rest of the club shot of to enjoy a sunny day on various routes in the Cairngorms.

Ten is a big group of varying abilities and we had a chat in the bus about planning a hill day looking at the weather and avalanche forecast and also the previous days activity. We then said what we hoped to get out of the day and asked what the group had done previous. We had a new member Ellen all the way from Australia with limited gear but we managed to sort her out. I had only taken one spare helmet and Ray had one so I gave mine up we looked at the gear and have a several types of crampons and a few had not seen much action. We also had a pair of “grippers” crampons in the group good for icy flat paths but not really great on the hill but we managed to cobble the gear out.

The car park was busy  there were few skiers but so many groups from all over  on winter skills so we wanted to pick a quite area away from the crowds and with not much snow that would not be easy, On the short walk in we talked about navigation and had frequent stops to show where we were and gain some simple navigation tips. We were followed in by Assynt Mountain Rescue Team who were training in the area. I always feel I should mention some of the call – outs I have been to and how tragic that not far from where we stopped about 15 – 30 minutes from the car park  I have recovered fatalities. It is hard to believe on a day like today with a warm wind and blue skies and the Mountain Rescue Teams should never be taken for granted.

Assynt MRT on there training weekend, a great bunch of people.

10 is too many for one group so further on we split up into 2 groups and I wandered into Coire an Lochan with my group of 5. We were off the path and on the way we past the Ptarmigan that were about among the boulders they were white and not well hidden. They were in there winter plumage it is amazing how few come this way into the Coire and the Loch. It is a great place and with the loch frozen and the brown dirt debris on the ice from past avalanches on it. When I was ill this was a place I came to in all weathers just to get a view or a feel of this mighty place.

At the Lochan a lovely place for a break. There are plenty of little gully’s and places to go and it can make an interesting way of onto the ridge.  Beware of loose rock and in a thaw cornice collapse. The normal climbing routes were quite. There is a group to the right and that is the way we went up. They were long gone by the time we started.

The huge cliffs of Lochan tower above and there were three groups doing skills but plenty of space. There were also couple of climbers about and with the cornices above and the thaw they were welcome to it. At the loch we had a break, it was frozen and then did some winter skills. It was all simple stuff like walking on the snow at first, using the boots properly then ice axe breaking and then a bit of a wander in crampons. It was as always a bit of a “faff” sorting the crampons, few had tried them for a while and it took a bit of time but the weather was kind.  It was like going back in time from my RAF days on the winter course, when frozen hands are the norm after helping a group sort out there’s. I used to make the troops in the teams put them on many times during the day just to get them sharp at it.

Ice axe breaking make sure you have a good run out and were a helmet. A skill to practice every winter.

We then set of for the main ridge in crampons up the snow, ice and grass by the burn. It was pretty tricky walking as the ground changed so often into ice, frozen grass and snow. It was a great place to learn and we had an hour of heavy concentration by all. There were a few snags as expected with the crampons but we all learned from it.

On the snow on the way up. Still smiling!

Concentration on the bits of ice.

Then onto the frozen grass, which you can experience on the hill in winter.

Frozen grass is never easy and walking in crampons makes it an experience? The wander up made the day a bit more interesting for all but care had to be taken and 5 in a group meant it was busy time for all. We were all looking after each other checking our crampons and each others the “buddy buddy system” and showing that we can cope with various terrain that even a mild winter produces.

A well-earned break with a view.

From here we had a wander along the plateau and some navigation practice for all. We had great views away from the path of the Larig Gru and the great Corries that are hidden and the views of the big peaks.

All maps out and get those rusty skills honed.

From here we had a wander along to the top of Lurchers crag away for the crowds who were all on the plateau Creag an Leth – choin 1053 metres a special spot and the wind got up but the views were breathtaking. It was good to see the improvement in a short time, just reading the map and getting to see the picture it produces as if by magic. 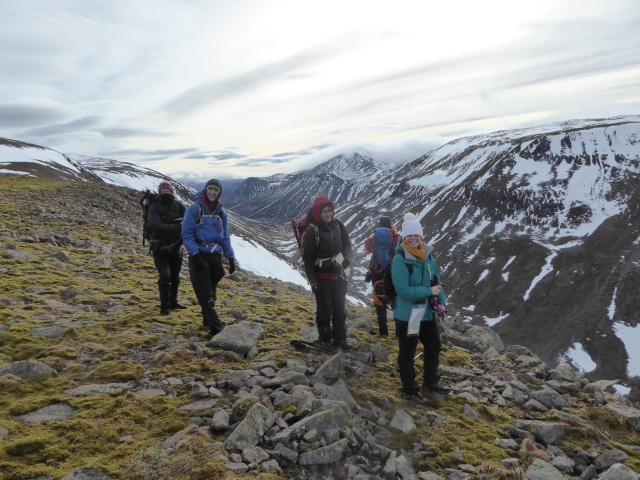 Loving the view. Devils Point in the distance.

There is a small boulder field on the way up to the summit and with the wind gusting we were soon taking care and walking between gusts. It was great to see all looking out for each other and the enjoyment all were having. 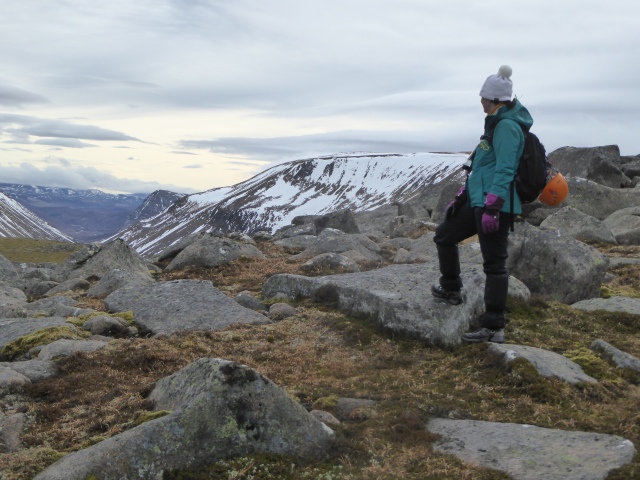 First day on the hill all the way form Australia loving it.

The weather was still good and we had a break on the summit out of the wind and looking at the magic cliffs of Lurchers Crag and its ridges and gullies and views. We all took photos and it was great that 1 hour from the car park we are in this peace and solitude.

In all a great wander and we headed down chatting and looking at the map and talking about emergency procedures on the hills. As we traversed back to the path a huge white hare bolted past me and into the rocks a great end to the day.

My nephew Scott Williams took the photo above he is getting some great shots you can see more on this link. He is loving taking photos of our wild animals that we must look after and the environment they live in.

A fun day in the hill.

We were soon back on the path lots of people now about and back to the Bus. The rest  of the meet were off the hills and we stopped in Aviemore for a drink. I was dehydrated that cough had been with me all day and I had two pints of orange and lemonade. It was then drive back drop everyone off and home at a reasonable time.

Hopefully all enjoyed it and picked up a few tips. It hopefully will make you more self-reliant in the mountains but keep practicing the navigation and the winter skills when you can? Maybe next time if the snow is back we can do a bit more and even a night navigation with the club? The idea was for more of the newer club member’s to become self sufficient on the hills and then pass on their skills to others in the future?

From the top of Lurchers crag.

It was a short day but a lot gone through and this was only a starter. It is worth spending some time on training instead of buying a £200  jacket why not go on a course there are plenty available?

Thanks for a fun day and make sure you check your gear check out and dry your crampons and maybe practice putting them on? A big thanks to Ray for his efforts he is a top man who I have known for many years a great pal and the man you want when all is going wrong.

I have big lecture in Edinburgh on Thursday and have a deadline of midday to finish it so I better get my finger out.

Thanks to all for a good day.

1 Response to A grand day in Coire an Lochan in the Cairngorms with the Moray Mountaineering Club.