Beinn Enaiglair – 889 metres – Breamore Junction and a grand wee hill in the mist.

Posted on December 22, 2017 by heavywhalley.MBE

Away early and got driven by Babs and her lovely Black Lab to the hills via Dingwall to collect Brent. We were hoping to climb the big Corbett not far from Beinn Dearg near Breamore Junction on the Ullapool road. From Walk Highlands “Beinn Enaglair is a western outlier of the Beinn Dearg range, well seen from Ullapool harbour. The hill is completely encircled by old stalkers’ paths and is a superb viewpoint.” Sadly not today no views of all these great hills.

It was great not to have drive after my 650 miles journey from the South and we had a good journey through Inverness to Dingwall where Brent had the coffee in! After that is was the 30 min drive to Breamore Junction. The roads were quite and the hills nearly clear of snow with cloud about. It was unseasonably warm for December more like late may but the summits were not showing today and there was a lot of mist about. Normally there is lots of deer about but not today even by the road. 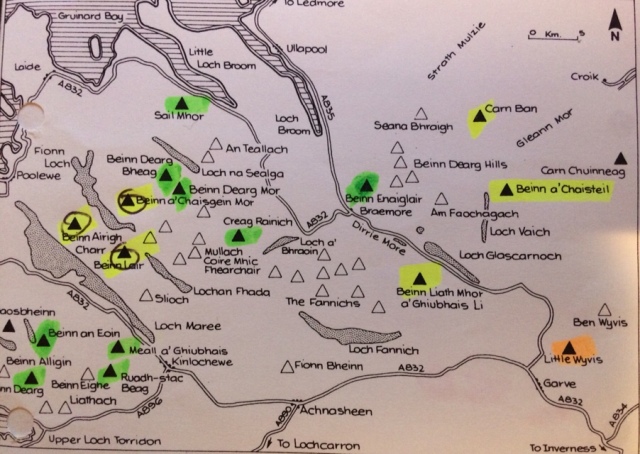 We arrived at Breamore Junction and met another pal John Cosgrove and his van. John was coming with us today and we changed into our boots and tidied up the mess that was in the car park. There were cups plastic packing and a mess about  it was sad to see this place so untidy with rubbish and headed off.

There is now a sign showing the way to the hill path from the Car Park and sadly the path was so wet after the big thaw. This area has many great stalkers paths and this when dry is one of them. It takes an easy line up to the aptly named “Home Loch” where there is a boat house and a lonely Scots Pine. It was on the other side of the Loch and I hoped we would take time to have a look on the way back. 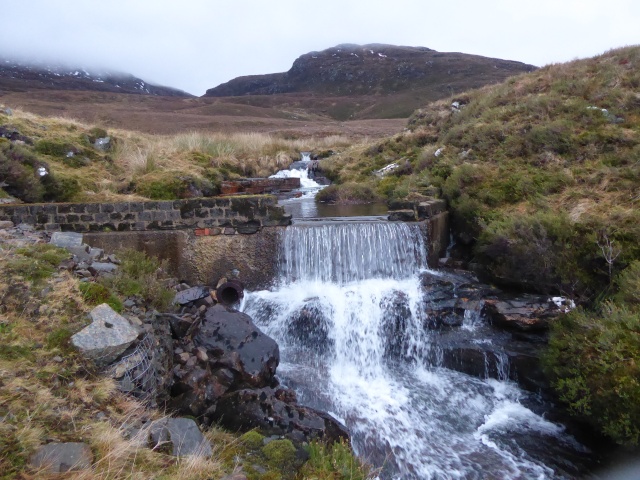 After this we passed an old ruin and then back on the track and main Stalkers path up to the beleach passing some bonnie waterfalls. There was still no sign of deer but Kalie our dog was loving her walk and great company.

On the way up.

The weather was dry and unseasonably hot for December yet I had lots of clothes on feeling the effects of a cold. The path works it way up to the bealach and the cloud was down to about 600 metres. There was a huge erratic boulder just off the path and this is a wild place to be! I had memories flashing of this place and this huge boulder and the misty cliffs was unmistakable.From here the ridge takes you to to the summit there was no path but its an easy line to follow.

A wild place 0 no bouldering today.

I had done this hill several times looking back on at least 4 ascents! The one that sticks on my mind is the North to South walk in 1976. We had left the Bothy below Seanna Bhraigh Corriemulnzie. It was only day 3 of a 3 week walk unsupported and carrying our gear and food. I was with Jim Morning and Paul Burns we had come from Ben Hope and Ben Tee then Ben More Assynt and Conival with a night stop in between. We stayed at Merkland Lodge with the keeper and his wife and the memories came flooding back as I coughed my way up the hill. The next day was Seanna Bhraigh and the Five Munros ending in Beinn Dearg and Jim added in Beinn Enaiglair and off to Loch Droma.

We were exhausted as we headed off down the same path all those years ago. We were fit. thought we were invincible and so young and loved these big days. The next day we did all the 9 Fannichs to the old Bothy the Nest of Fannichs burnt down many years ago! These were crazy days 41 years ago now it takes most of the day for one hill but what great memories.

The beleach on the way up head down and mind in neutral..

I have a bit of a cold and the coughing a lot and it continued all the way up but it was head down put on more clothes as it got colder. The weather was misty and damp as we moved up onto the main ridge. The odd time the weather changed we could see through past the lochs and my route all those years ago to the wee bothy at Loch Droma with Jim Morning and Paul Burns. It looked a long way even today. Even today when your on the hill it is great to sort out your head and Babs and Brent were chatting all the way up , John Cosgrove was charging ahead and I was in my own thoughts.

The summit in the mist.

There was a bit of old snow on the hill and in the mist we saw no views, normally this is a great viewpoint of the Beinn Dearg hills the Fannichs  and An Teallach but not today. I was dissapointed but needed my fix of hill after a busy 2 weeks away down South. It was also the day after the Lockerbie Anniversary a time I find hard and two pals Dan and Al Swadel had visited last night and had a dram with me. I am lucky for having so many good pals who keep their eye on me.

The sun trying to break through.

We soon made the top and it was cold on the summit and after a short break for some food we took a bearing and headed down the ridge keeping an eye on the route. Off the ridge the ground was wet and steep with a bit of scree and rocks so we took care this is not the place to slip. 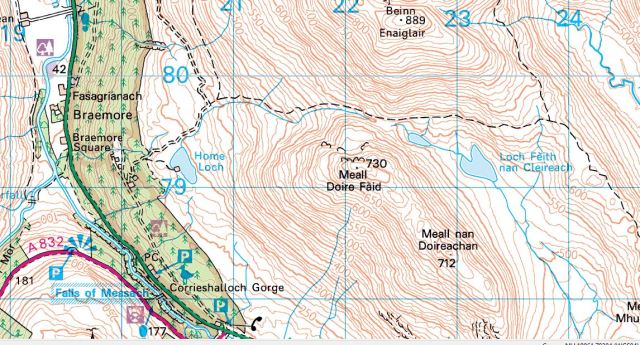 We were soon back on the main path and got the odd view on the way off, the ground was soaking and we all went at our own pace. The body feeling the odd ache and pain but John going like a train ahead he needs to slow down at over 70 he was the eldest in our group. I thought I was going to get a picture of a Broken Spectre on the way off but it nearly happend.

It was back on the path and then get some gear off we were warm by now and then back on the other side of the Home Loch. It has a boathouse and has had a lot of work on the banks and a solitary Scots Pine making it an idyllic place to be. 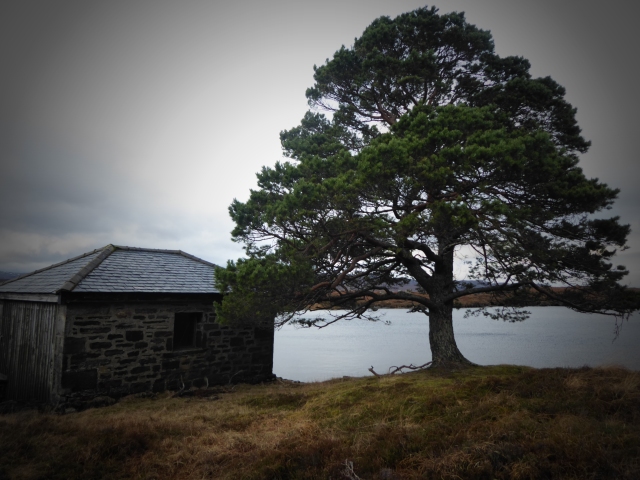 The Solitary tree in a grand situation.

The work done here to build the bank of the loch was impressive I would also imagine the fishing is great here? As we walked round the loch I wonder how long ago it took to build the levy and what a great job they have made of it. It was a peaceful place to be. 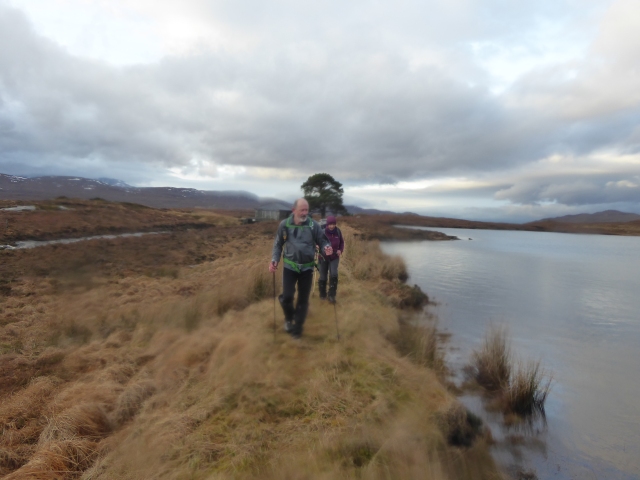 Loch Home and the levy with the tree behind.

We were soon back on the path and then back to the Car Park and the drive back dropping Brent off in Dingwall. The wee dog slept aIl the way back a well behaved lovely companion on the hill. I  managed back for Friday night Fish and chips forgetting to get my first OAP deal at the van. I was soon home, damp gear off and a bath and chill out.

One of my best mates John relaxing.

The towns were busy with Christmas shoppers we were well out of it and it was a grand day and Babs got a new Corbett. Thanks to Brent, Babs, John and Kallie for a great day now to get rid of this cough?

Off to bed with some hot Leamsip and whisky it was a night of coughing.