Happy Christmas – Hill days and ice climbs on past Christmas Periods. Can you donate to the Homeless?

Posted on December 25, 2017 by heavywhalley.MBE

Yesterday was busy I spent most of the night coughing and lots of broken sleep the usual Christmas cold that sweeps the village. I managed to get into shops early though they were still busy at 0700 a bit of madness. This year I wanted a low key Christmas and got some visits to pals done and good friends during the day. I even had a drink with Dan in the afternoon and Ashleigh then has a “faff” for my wallet, dropped of some cards and settled in for the night .It was a magic few hours and no driving at last, thanks Dan you are a man who is a long time and great pal.

The TV was rubbish last night but I watched “Nativity” that the girls had introduced me to what a laugh and then “Eddie The Eagle” another bit of fun.  I was so used to working or being out with the Mountain Rescue at Christmas in the past so it is great to relax and hopefully get out for a low level wander today.

In the past the Team at Christmas was good fun as we were usually at Newtonmore or Fort William nearly 40 years off and on. Now and again we would get a call – out some sad ones unfortunately. In modern times there were a few more for depressed folk or vulnerable people that the Rescue Agencies searched for. In my last few years in the ARCC at Kinloss I always did Christmas Eve and night  shifts about 14 hours and some sad times but great to see the effort by all concerned for someone on trouble.

These days before Christmas were usually spent on the hills it all depended on the weather and I had a plan if the weather was wet and limited snow, then a bothy trip may be on. I would chase some remote hills and it became a thing to do. Others were just great trips on the hills so quiet and peaceful and it got you fit with 6 – 8 days on the hills while most are drinking and putting on weight.

The Christmas/ New Year grant was split in two for a bout 4 days then back for 2 days to turn round often cancelled due to Call outs and the another 4-5 days for New Year.  There were usually two bothies used Newtonmore and Fort William. The Team Leader/ Deputy always cooked for the Team on Christmas Day and that was tradition that continues to this day.

1993 Xmas walk up the Ben, often we would climb a route like Ledge Route or Tower Ridge away early to ensure we were back for Christmas lunch/ dinner.

The hills were usually quiet at Christmas and the Ben was usually the hill before a big festive lunch most times we walked up and others if the conditions were there we climbed the odd time staying in the CIC hut below the Ben North East Face. On the odd occasions the meal was delayed as Tower Ridge in early winter 24 Dec is a long day with limited day light. There were a few epics with the weather and the conditions.

If conditions were in at Newtonmore then” Qui Qui” Creagh Dubh may be climbed sometimes at night, always a great fun trip and done often before the pub on or some roadside ice near Aonach Mor.

Looking back these were great times with the odd call home to families to say all was well, the moving bothies to help in searches all over Scotland but the camaraderie of the  team was specail. We treid to ensure the married guys had Christmas at home but how many kids missed out on Dad at Christmas due to a call -out as if it was a big one the Team assisted.

So today I will take it easy and try to shake off my cold and in the warmth of the house and the odd visit I will have a thought for those who are working today looking after us. My thought will be of the village halls, the people some now gone and the great days out on the hills.

Skye – with Paul Rosher a true character and friend for so many years.

A writer and adventurer will forsake Christmas with her family to sleep out on Britain’s three national highest peaks to raise cash for the homeless.

Phoebe Smith will sleep on Snowdon, Scafell Pike and Ben Nevis on successive nights over the festive period to help rough sleepers.

Her Sleep the Three Peaks for Christmas venture has a target of bringing in £5,000 for the Centrepoint charity.

The writer said: “I love sleeping in wild places, but I am very aware that I’m privileged enough to do this for fun whereas many young people don’t get the choice.

“So I’ve decided to give my Christmas up this year. No tree, no dinner, no bad TV and no time with the family. Instead I’ve decided to Sleep the Three Peaks for Christmas – by myself – to raise money for the homeless charity Centrepoint.

“Up to 16,000 people between 16 and 25 will be at risk of homelessness over Christmas through no fault of their own and during the festive season it’s all too easy to get caught up in everything in our own lives and forget these people.

“I hope to change that. By giving up my Christmas I hope to help raise money to help young people get the choice to sleep rough for fun rather than necessity. Even if my actions helps just one person it will be worth sacrificing the roast.” 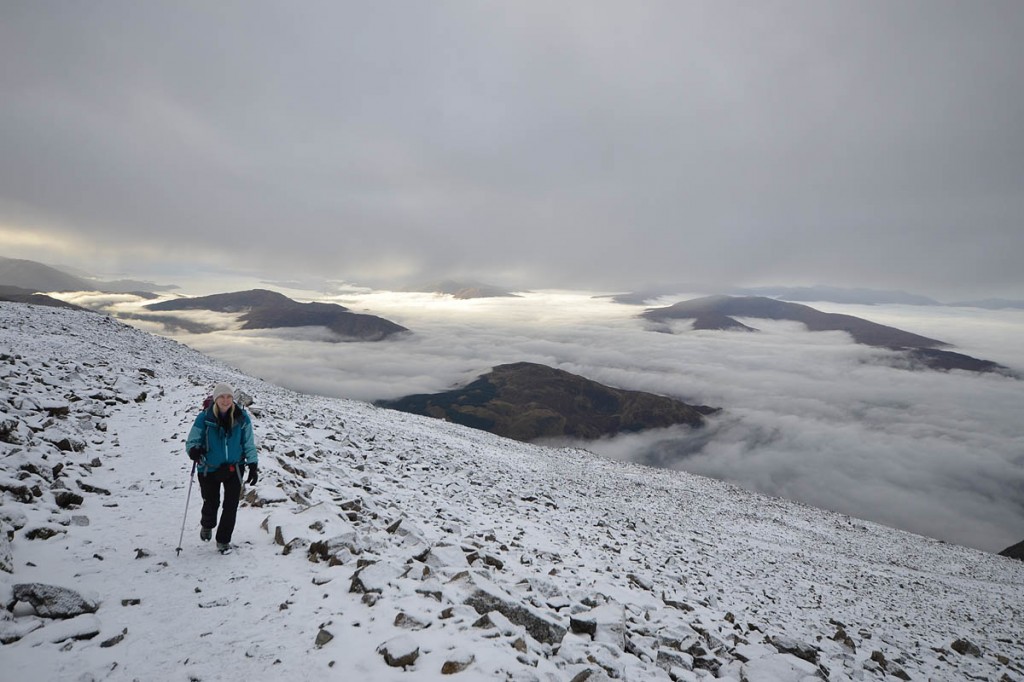 Ms Smith will travel to Wales on Friday to sleep on Snowdon before heading north to make Scafell Pike her overnight home on Saturday, before continuing to Scotland on Christmas Eve. She said: “I’ll be on top of Ben Nevis, waking up on Christmas Day as the highest person in the UK.”

She hopes to be live on BBC Breakfast on Christmas Day, signal permitting, and is also hoping for national newspaper coverage for her adventure.

She will also be Tweeting and posting on Instagram during the Sleep the Three Peaks for Christmas event.

Ms Smith has set up a justgiving page to raise funds for Centrepoint.