A cycle in Appin heaven! On the hills from Lochaber MRT “The conditions are great at moment but underfoot they are very unforgiving and care should be taken when out.”

Posted on February 26, 2018 by heavywhalley.MBE

After a great night at the Fort William Mountain Festival and a magic breakfast in the Alexandria Hotel it was off to see my friend Sue who fancied a cycle. To be honest I just wanted to be on these shinning mountains snow plastered and already at 0800 looking magnificent.  Years I have spent on these peaks but the heart was pulling me to them, but there will be other days and a cycle was what was planned. As drove to Onich along Loch Linne I was overwhelmed by the views this was Scotland at its finest and despite the potholes on the A82 I just loved the drive with the mighty Ardgour looking superb. I just had to pull in and enjoy the view there were few folk about and the views were free and the air clear what music you hear in your head on a day like this..  Snow capped mountains and the sea and blue skies, no wind and not too cold is this heaven? 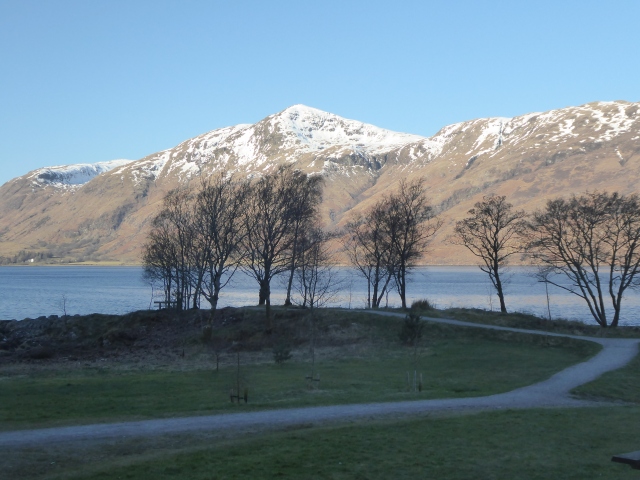 It was a great day Cycling from opposite Shuna Island to Port Appin and along the Port Appin Loop passing some incredible places like Lismore Island then past Castle Stalker and along Loch Creran and lunch at Creagan then back by the old railway to the car. It is an area I missed in my selfish charge about the mountains but what a new world to explore and the Sustran cycle routes are outstanding and this was wonderful.

The cycle track is magic and only one idiot in a car rushing. It is a wonderful cycle and one to enjoy and there are a few hills in it! Sue was enjoying it I was going ahead taking photos and enjoying the wildness. I love the sea, the air and the peace of these types of places and of course the sun. I could be in some dank cold gully but these to me are experiences for another day.

When you go with Sue you stop at a few places only the The Lighthouse Craft shop in Appin so well worth a visit and the grand-kids got a wee surprise all the crafts are local and a great place to visit. Then we got off the bikes and walked along to the arch and along the beach and sat and took in the views ad the clear sea. Is this heaven to me it is? 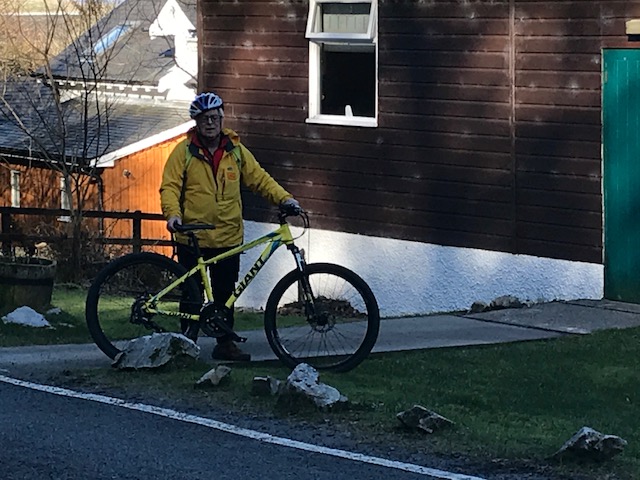 I used to stay in Appin in the village Hall with the the RAF Mountain Rescue and it was magic to pass it and all the memories of this incredible area.  The troops got stranded in Lismore once and we had a call out it was a bit of a scramble getting them back in time but we did it. I was laughing to myself as I passed it it was my first weekend in charge of the Leuchars Team and they were trying it on, after that there were some rule. Poacher turned gamekeeper?

We had a short walk to the Arch along the coast stunning and another gem of the area.

Off the bike at the Arch in the sun. We got off the bike and had a walk it was magnificent. We went down to see and had a short break you could have sat and slept in the sun in February this was some day. We had a long way to go though but there is no rush and so much to see. So long I have blasted along these hills and missed this being a bit older has its benefits.

The sea and snow capped hills is their anything better?

Loch Ceran was stunning and the snow capped hills again gleaming in the sun, the road was quite and enjoyable but we took it easy. There was the constant smell of wood smoke as the houses we passed were burning the local wood it lent to the atmosphere, gardens were getting tidied up and the rubbish burnt spring is coming? We passed snowdrops and the odd spring flowers out drinking in the sun.

The sun shone all the way in the shade there was a bit of ice but I even took of a layer of clothes was this really February.

Is this not a wonderful place to be.

It was Sue’s birthday so it was lunch (on me) at the Creagan superb food and what views with so many folk out and about enjoying the day. We ate outside and it was busy but with the views there was no rush and it was enjoyable this cycling game .It was a long stop just enjoy the food the tea and  then a push up the wee hill then downhill mainly back to the car. 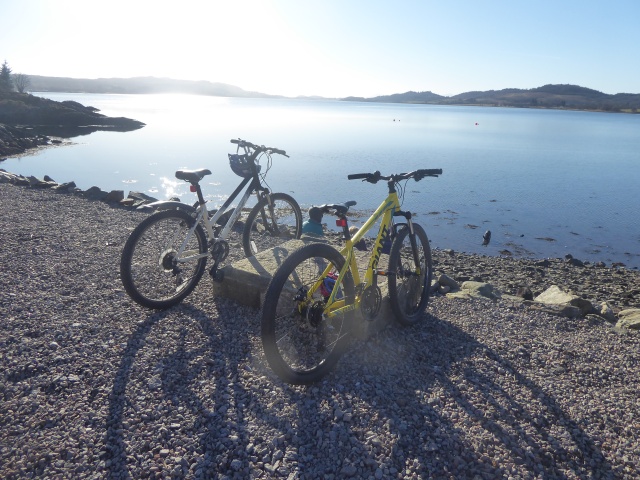 It was a stunning day and thanks to Amie for the use of her bike and great to take it easy it has been a hectic week and what a day to end it on. Yes I missed the hills but have a weekend away on the hills next weekend so they will always be there.  I saw some wonderful wild life with a young heron stealing the show and so many roe deer about.

It was head back as Sue was working and on the way I popped into see RAF Leeming MRT at Corran who were up for a week just of the hills on the Ben and Glencoe some having a great day on Crowberry Gully and loving the weather.  The drive back was great the hills now looking great with the stars out and the odd car in the car parks with a few getting the best out of the weather.

There is a cold spell coming and the hills and the snow will get so hard and as Lochaber advise. The snow is hard as iron wear the proper gear and crampons and ice axe are essential.

From Lochaber MRT  “As you will have read in the media, we managed to find Jim Stalker the missing climber on Beinn a Chaorainn. Jim was a close friend of several team members and know to most others. It was a difficult rescue but we were pleased that we were able to bring him home to his family. We were assisted by RAF Valley, RAF Lossie and Tayside Mountain Rescue Teams as well as the crews of Rescue 951 over the extended search period. Thanks to everyone who assisted. Some footage from the drone used to search the location along with teams on hill.

We had fatality on Sgurr Thuilm in the Glenfinnan area when a hill walker slipped while descending and suffered fatal injuries in the fall. The team were assisted by R951 in retrieving the casualty. Our thoughts are with Chris’s family.

There was hill walker with a broken ankle on Ben Nevis who was recovered by R951 while in area assisting on the above.

Today we are out in Glen Roy where two hill walkers were crag fast. Team have climbed up to walkers and are walking them safety. R951 is assisting on scene.

The conditions are great at moment but underfoot they are very unforgiving and care should be taken when out.

Thanks to all the teams and crews who have assisted us over last week which has been challenging.

We would wish to offer the friends and families of all the people who have lost their lives in our mountains. Our thoughts are with you.”