Sad news – Mountaineer, Ted Atkins killed in the Italian Alps whilst descending Civetta in the Dolimites.

I received this from one of my best pals Terry Moore it is the call you do not want but that I sadly have taken on to many occasions.

After speaking tonight I can confirm that TED ATKINS was killed on descending CIVETTA in the Dolomites today.

We have spoken to his wife SHONA and son LEWIS who are in turmoil during this early stage.

His pal NEV TAYLOR was with him when descending the steep path after completing a via ferrata route.

This is a real tragedy for Shona Ted’s wife and Lewis his son. If there was a man who lived life to the full it was Ted.

Ted on the summit of Everest !

These are the awful calls you dread :

Ted was a legend in the RAF Mountain Rescue Service he lead our successful Everest North ridge expedition to Tibet in 2001. It was his vision that took us to the summit of the world and how he got the powers to be to let us go was incredible. Ted was just a Flight Lieutenant a lowly rank in the military yet he got us the sponsorships and the authority to go to Tibet. I was with Ted for nearly 4 months on that trip. It was unguided just 12 pals who knew each other all bar one was a Mountain Rescue troop and we never fell out. All came back still pals and with our all our fingers and toes. It was a hugely happy expedition where few can say that after being away for nearly 4 months. 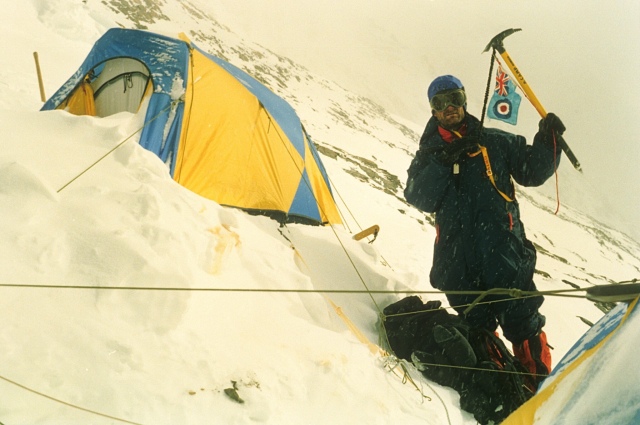 Sadly Ted did not summit on this attempt but had two attempts and on the last attempt winter was coming and we were the last team on the mountain. The weather was crazy heavy snow and I was alone at ABC with the Sherpas fearing the worse. It was great to see him Brian and Jim descending safely after a big storm. They were alone everyone else had gone home but got off safely! That was a humbling experience and I can only thank Ted for having the vision to get us there, for the trip of our lives. 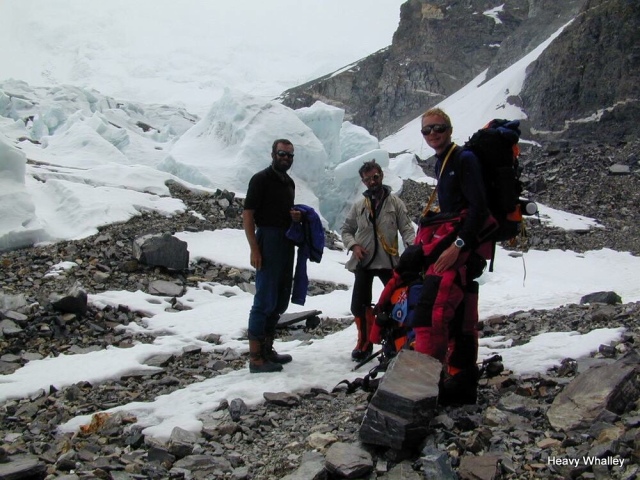 Everest below the North Col after the summit attempt !Ted always came back from his adventures. He was so happy that Dan and Rusty had summitted and got down safely! Ted had been with a huge Joint Services trip to the West Ridge previously that did not Summit so Everest was unfinished business for him! Ted on this trip to Everest took a boat that he sailed at over 20000 feet in the glacial lake just below Advanced Base Camp in true Ted style! He was so wild with his ideas but so incredibly practical and clever. The Navy in MOD were not impressed with the RAF Holding a record for the highest boat in the world. Ted was always thinking out of the box. Ted you took us all on the adventure of a lifetime and we can never repay you for that wonderful trip in 2001.

Typically Ted he came back and summited a few years later and that was a story on its own. Again he pushed it to the limits on a mountain that takes no prisoners.

I had known Ted for over 30 years at one point as his team leader at RAF Kinloss he kept me on my toes. He was a true MR and RAFMA troop what a man throughout. Ted was a Mountain Rescue and legend climbing in all weathers pushing the boat out as you have to do in this job. 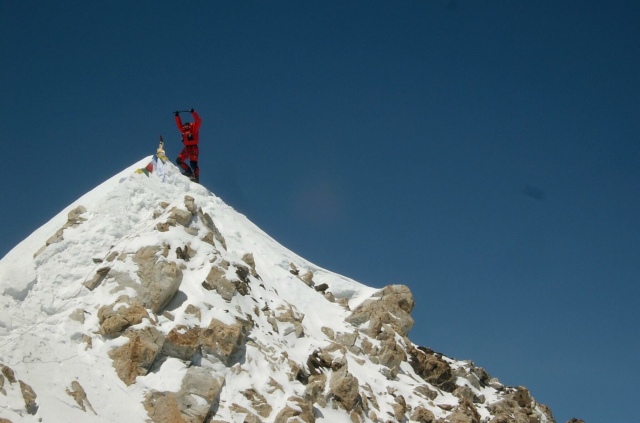 As a mountaineer he had successful ascents all over the world from Everest, Kangchenjunga, Nuptse, Makalu and Ama Dablam. He also had so many ascents in the Alps including the Eiger North Face with my pal Al MacLeod sadly gone as well.

Ted seemed in the mountains in his adventures he was the one who was always a survivor, some thought invincible,  pushing the boat out so often. He was always sharing his adventures and taking so many young team members with him on his wild adventures. His strength was not through luck but huge experience and as always calculated risk.

In the RAF Mountain Rescue and RAFMA where learned his trade he was a real character and at RAF teams and Kinloss MRT he was  and is a legend. Nothing was out of limits for Ted in these days. He pushed the standards in all weathers pushing the rules in the military to the edge, no easy task. He was the life and soul of the party in every situation and these were crazy days. We played and lived hard these were the days of our lives. Ted would have an outfit for every occasion and was always in full flow if out at the dancing or on social events. Mountaineering was not all about climbing it was a hugely socail event in these days. 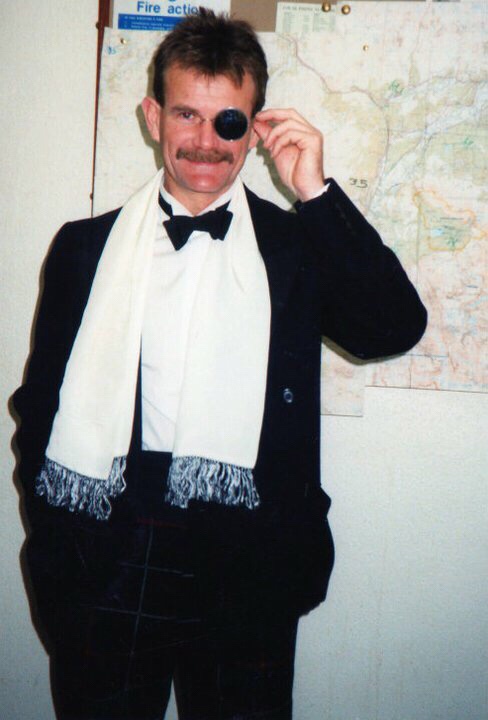 Ted ready for a night out in Elgin. He had clothes for every occasion and hats to match, A fashion icon in his own wayout way.

Since he left the RAF Ted had a successful oxygen business in Nepal supplying oxygen to so many expeditions with his unique delivery system that became the industry standard. It was called Topout Oxygeneering and was thriving in Kathmandu .  He was into high altitude free fall diving/parachuting in a big way. He took this like his Mountaineering to the edge pushing his life and the gear to the limits. What a brain he had as an engineer he was always inventing equipment and gear from ice axes to clothing all had the Ted inventiveness. 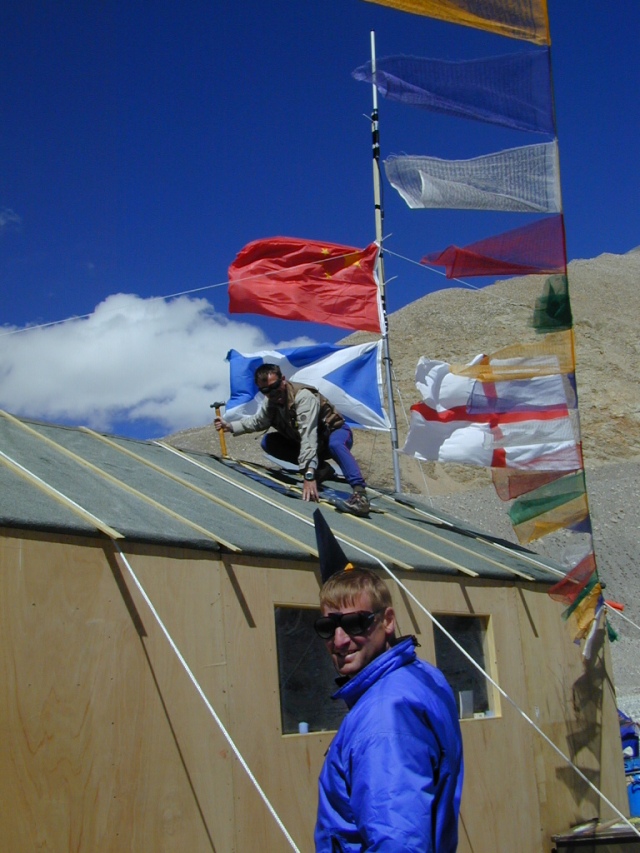 His was the idea of the shed on Everest a lifesaver and what an idea a place where we could shelter and sort things out. They said it would never be allowed but we made it happen, Ted had the idea and we got it done.  It made our trip and the memories are so real to this day.

He ended up being an officer in the RAF after going through the ranks. Ted then was running the Mountain Rescue Teams a job he loved. The annual Inspections by him were very different from the norm. Ted was still a troop loving the climbing the freedom  and still had such crazy exploits. These ranged from falling off a wire bridge after hand traversing across in Glen Tilt , smashing his ankle to riding a “Garron “ highland pony bareback that he fell off ! All are in the  RAF Mountain Rescue folklore. He loved the troops and they loved him. He loved the Scottish Sea stacks Hoy, his overnight bivy on the top when he left his soul mate Smudge to get some more stuff.  The old man of Storr, Am Buachaille and of course the great adventure on the Maidens all with his partner Smudge Smith. 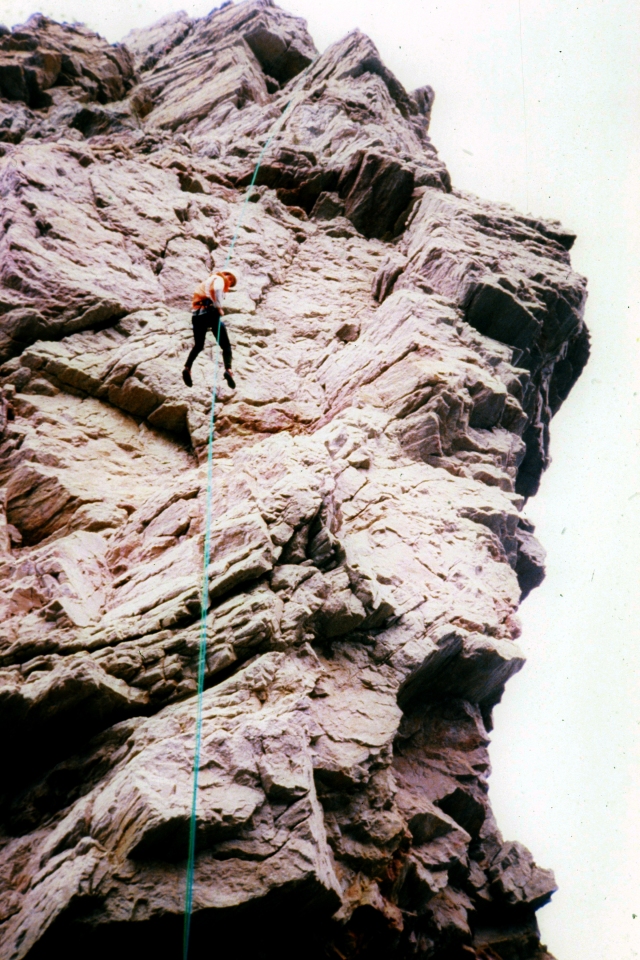 The Maidens Ted abseil Photo Smudge Smith – A marvellous 40 metre stack where Tom Patey was tragically killed abseiling off after the first ascent in 1970. Remote and rarely visited the stack now sports several routes of which the easiest is HVS. The approach is a long walk and 40 metre swim from Whiten Head or a long boat trip across Loch Eriboll from the vicinity of Rispond.

On the Maidens the pair of them complete extroverts road a motor bike from Kinloss in Morayshire to the far North. They were dressed in dry suits had a crash and various minor trails before climbing that Classic sea stack. It was a Ted adventure in the classic tradition.  All huge adventures that deserve to be told to a bigger audience and are incredible tales that only a few can tell with the storytelling of a Ted epic fun day !

Ted was spending so much time in the Himalayas on business and expeditions and always up to something. Every year it was a new peak hew adventure testing oxygen to extremes life was full .He even ran the Everest marathon after a successful ascent of a 8000 metre peak. Ted was now an accomplished mountaineer. He had changed like many from his early days from that crazy man from night ascents after work as a young troop in the Cairngorms with the Mountain Rescue team . Once he had a fall and the team and Glenmore lodge and the team carried him off . This never stooped Ted and soon he was climbing again . His adventures took him all over the world his life was incredible. He is one of the few who were awarded the Polar Medal for his efforts in the arctic during another expedition to Brabent Island another epic tale and hence a love of this specail place,

2001 the boat on Everest Highest boat in the world.

Everything Ted did was to the max. He had so many adventures, fun and epics it is hard to believe he fell on the way down from a via Feratta near his home in Italy where he was now living. This is where he made his home and was sorting it out and spending family time with Shona and Lewis.

Ice climbing January 2018 with TMoore and Gerry McGarry. Many of his pals came out to climb in his new home he loved it there and was so happy living in Italy .

My thoughts are with Shona his wife who always understood his adventurous life and his son Lewis in Italy. Lewis lived his life with his Dad running, skiing and climbing in his local Italian hills. They have a great bond and I loved seeing Ted’s big smile on the photos with Lewis. He was a proud man of his son and you could see this when he wrote about their latest adventures.

It is with great sadness I put these inadequate words together!

Terry Moore will update any arrangements and I will share them to Ted”s many pals. Please take time to think about Ted and his amazing life.

Our condolences to Shona and Lewis and the family.

Yesterday we lost a true man of the mountains and the skies. A true adventurer and lover of life . Ted was everything we all want to be in one huge exciting bundle, he did things that so many dream about was always pushing it and life to max. We will miss him.

48 Responses to Sad news – Mountaineer, Ted Atkins killed in the Italian Alps whilst descending Civetta in the Dolimites.