Dog Tails from the back of a Land rover Part 6. Lockerbie a tragedy unfolds.

Things were going so well in Heavy’s first year as Team Leader  but Heavy had not a break for about a year and if he did it was away on an Expedition and I had a holiday but still got out with the team. He even ran the Advanced Rescue Course at RAF Leuchars and that was a lot of extra work. It was a crazy year but the team was strong and they needed to be. 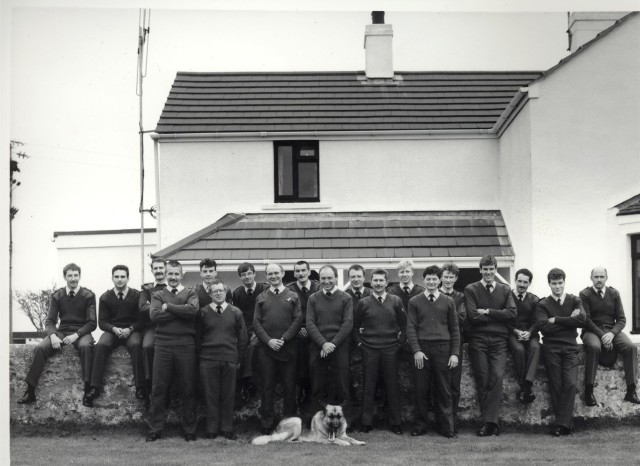 The team goes out Christmas and New Year and it was a busy time for weather and the odd call – out. Heavy was taking time off for the first time a few days off and was getting things sorted out. He and Dianne had split up but were still friends and then out of the blue his Life changed. It all happened at once as it does.

We got the awful call that a Jumbo Jet had crashed near the Borders, This was real nightmare one that we in the RAF Mountain Rescue had feared for years. He had a major turmoil going that day on in his life as a person he loved dearly had arrived from down South and they were planning to get together. It was a very complicated tale and Heavy will tell you about it. She had just arrived of the train and been in the house for two hours when Lockerbie occurred.  Heavy had to go straight down brief the Team and then sort out his personal life and travel down after the Team.

We were an hour behind the team had a Police escort and us in Heavy’s Old car from the door of his house and as we drove down the closed motorway we could see the fires in the distance. It was hell for a few days I was kept out of the way the first night but after that I went out with the team Heavy went out on his own and came back in bits to see what was going on . I will never forget those few days, the smells, the death and destruction and the scenes would like everyone stay with us forever. I had been to many aircraft crashes but nothing ever like this. The civilian MRT and many Search Dogs were there for days and weeks after it is a tale that has been written about so often. As always in this turmoil the locals were great we stayed in the local High School and were fed by the WRVS, I was fed as well every day, I was fussed over but after 3 days we were glad to leave. We had 4 RAF Teams there and there was a huge bond between us and I was proud to be part of it. Many of the team hugged me when they came back from searching, yet they were so quiet.  The teams organised the searchers and found so many fatalities, they had it all on maps in the school it was a terrible time. had never seen this before most were struggling with what they had seen. Heavy was exhausted but he did not go home. His personal life would be on hold as he wrote the reports of the tragedy that had to be done immediately. He was in the MR section as he wrote through the night so many troops came in and chatted. These were hard men yet they were in bits at what they had seen. It was going to be a very difficult Christmas for us all. I was the only one who witnessed this and the effect on him. These troops all my mates were suffering the hardest folk you could meet and I saw a few cry late into the night. I hid under the desk and slept, poor Heavy hardly slept at all. I sat under his desk and heard it all, dogs do feel pain and know.

After Lockerbie there were massive reports to be done and this was before the Team as always went out for the Festive period how could we be festive after what had happened. The Team was all over the news and Heavy was getting pressured by the media and the military. For the first time at Lockerbie the World’s Media was there at the scene and it was hectic it was early days of satellite technology. As I said when we arrived back the Station Commander met us with some beer as we arrived back. We were now the flavour of the month on the Station but everyone found it so hard to get on with life. The troops went home to families and a few could not cope, what could you say after what they had seen and found solace with each other. Lucky we had only one day at work and everyone was asking questions.  We were all looking forward to a break away from the pressure and the hills where we could sort out our heads. As a dog I could see the changes in the troops. Normally we will get about 12 who stay out over Christmas that year we had over 20 and the complete team came out over the period. Many of the team came back and forwards and there was much coming and going and trying to get to grips with it all.  Most l found it hard to cope, the troops had a wild night in Kingussie where we were staying and Heavy looked after them all. We were so lucky that the village looked after us even the local Policeman Jimmy Simpson the SARDA man made sure we were okay. Next day Heavy and I went for run out to Ben MacDui just him and me; it was great to clear the head. It was bitter day and we did not stop we got some looks as we ran over the ridge in trainers when many were in full winter kit. The troops met us on the way back, many were waiting for him and ensured he got of the hill.  Heavy was really tired as the days without sleep had taken so much out of him.  That night the team looked after Heavy and his great mate Al MacLeod was sent over to look after him from Kinloss who were at Fort William. You found who your true friends were. 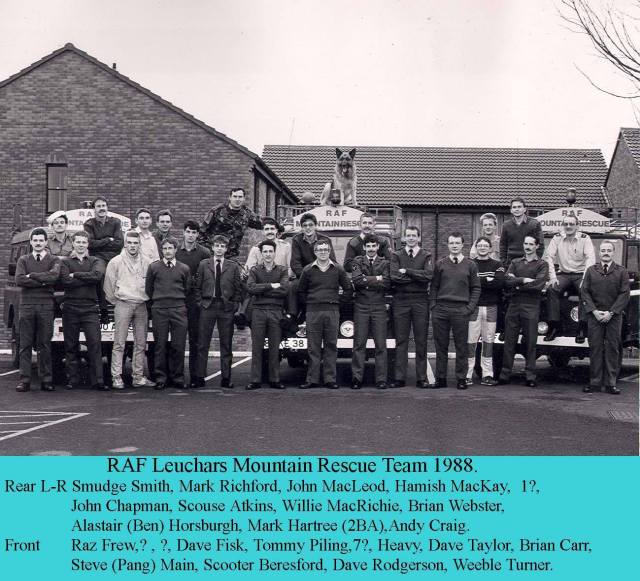 After the New Year we had a visit for the whole Team by Military Psychiatrist’s. a group of 6 arrived at the Team HQ and Heavy got a real grilling, I was under the desk at the time, what was that about! Then the Team had a joint briefing and many were upset that Heavy had asked for help for the Team. Many doubted his advice and that hurt him as he had no clue what would happen in the future. This was the early days of PTSD and in the much good came out of it. These were when we were all learning how to cope any way we could.  He was given a a real hard time from many who thought that he was overreacting and we never ask for help that is a sign of weakness?

Life changed after that and Heavy has written about it in depth so I will leave it there. He changed a lot and became very aggressive, grumpy, upset and he was exhausted and ill and had problems for a long time to come. In addition but great for me he and Vicky got together in amongst all this tragedy and I met a young Stephen Vicky’s young son who I really took to. I remembered Yvette from Wales. The small house at Dairsie was soon full of kids and it was a great time for me. I got really looked after a few new rules but what fun I had with the kids. Yvette bought a cat into the house Clova and it used to take the micky out of me, Clova knew that it was protected in the house that was her environment. She would regularly wait till I fell asleep then run across my back or in front of me, but I would get her back and pinch her food and I got to like it. When we got outside it was different matter and we had some fun together but if I got too pushy I was rewarded by a swipe across my nose!

It took a long time for Heavy to recover but he did and had a break from the hills and some family time. He did become very ill but the Team carried him after he went sick and the kids and his partner did their best but this was a tricky time.  It was all new to us all what was happening to him and there was no help. A few thought he was finished during this period but the real troops supported him I still went out with the team but we had some great days as a family on the hills. On our local Munros Mayar and Dreish we got off a bit late Stephen was very young and on the way back I did my unusual of climbing a deer fence but got my Carabineer caught in the wire at the top.  I was hanging upside down Stephen was crying as he thought I had it but Yvette and Heavy climbed up and sorted it out. I got told to make sure the Carabineer was locked when not in use. I also got into trouble as if I had no water  in my bowl would find the nearest toilet and if clean I would drink out of it with my Carabineer clanging in the bowl.  I was getting domesticated and so was Heavy.

Life went on Heavy improved in his health and the call outs kept coming and the Team was immense, what they had been through made them a special group. We had an aircraft crash near St Abbs Head when a Jaguar flew into the sea Cliffs and that involved a abseil down cliffs that were on fire. The team coped with everything and we had some incredible hill days. After Heavy got fit again we managed “Tranter Round” a big day in 22 and half hours, just Heavy and me. The hills seamed to help Heavy especially when we were away just the pair of us to get away from the pressure. 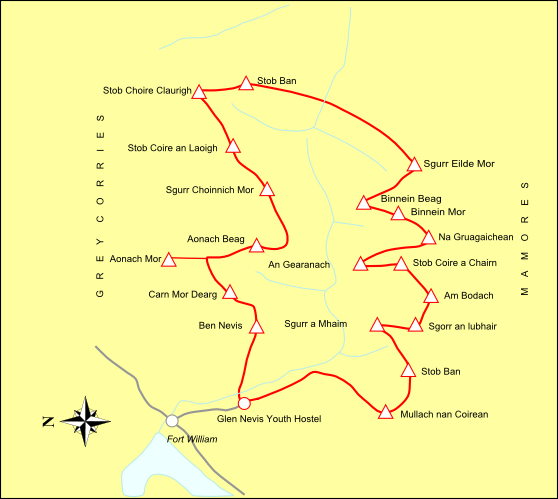 We had tried it twice before but this time managed it. It was just the two of us together and what a day it was.  The original 24-hour concept, now superseded by Charlie Ramsay’s Round, but a magnificent and natural expedition none-the-less. The 36-mile (20,600 feet of ascent) route takes in the Mamores plus the Grey Corries, Aonachs and Ben Nevis, and was first achieved by Philip Tranter in June 1964.

I was getting a bit older and feeling the pace a bit but really strong once I was on the hill, we went all over the place and ventured into the North Of Scotland a lot. It was long drives but so worth it to get these great hills and the team loved it. The Mountain Rescue courses were still being run and we even ran the Team Leaders Course at Leuchars.   Then Heavy found out he may be posted to RAF Kinloss as Team Leader! This is what he had always wanted but was he able to manage it. Lockerbie had taken a huge toll but few knew apart from me and the family.