St Valeries Bothy in the Cairngorms 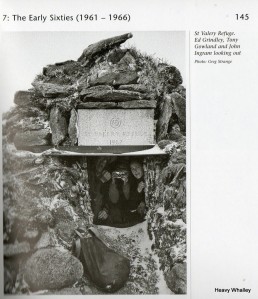 I received some interesting information from yesterday’s blog on the El Alamein bothy in the Cairngorms. One question asked did the bothy have a bell ?  It also got me remembering the St Valeries bothy that was on the cliffs above Stag Rocks above Loch Avon. The bothy was built-in 1962 and was used mainly by climbers on the nearby Loch Avon Cliffs. It was a small bothy very like El Alamein made of local stone and turf with a few pieces of framework to build the basic structure. It was taken down after the Cairngorm Disaster in 1971 and was a real difficult time with various organisation’s for keeping the high Cairngorm bothys and   others who wanted them taken down. including Mountain Rescue Teams, the Police and the public.It was a huge time of upset for many,It was not sorted out till 1975 when the Curran and the St Valeries were taken down after a huge discussion and several years of difficult negotiations by all concerned.   John Duff the Ex – Team Leader of Braemar Mountain Rescue Team tells his account in a wonderful book ” A Bobby On Ben MacDui” This book tells  much of the politics of this sad period after the tragedy. It is a book few have read but definitely a great read into Mountain Rescue and the Politics of the Cairngorms. It  covers the tale of over 3 decades of involvement with Police and Mountain Rescue Teams. There are moments of great sadness, counterbalanced by, thank goodness by moments of enormous gratification. There is also a lot of camaraderie, practical jokes, hilarity and the odd row.

The St Valery Refuge was above the Stag Rocks  Grid reference NJ 002023. There are many tales of epics on Rescues trying to find the hut which in wild weather was never easy. On a great day it was a marvelous location but it was incredibly exposed and very near the cliff edge in the days before GPS and other navigational aids.

In 1971 Bill March & Chris Norris were to search the St Valery Refuge on night of the Cairngorm Disaster and though great mountaineers failed to find it spending the night at the Shelterstone  with Alan Fyfe and Reg Popham who were searching another area. This is how difficult an area it was in and so tricky to find.

St Valery Bothy – what a view! A wild place to be on a winters day.

I was told on one search just before the bothy was knocked down that there was no room for us on a wild night by some ensconced famous climbers. It was not at all a diplomatic discussion that was occurred,  but we soon got in and shivered the night away. I remember nearly being blown away as we left in the morning, the wind was incredible. The bothy was very near the cliff edge and in a wind could be a wild place to be.

St Valeries bothy was removed with help from the Royal Navy, Police and Mountaineering Council Of Scotland in 1975 and still those who used it or were involved in the debate have differing views. I am sure last time I visited the area a few years ago the bothy engraved stone with the name was still there as the only remaining piece of the remains of the bothy left. Any stories and photos would be greatly appreciated.

2 Responses to St Valeries Bothy in the Cairngorms