I have had a great couple of days and just back from an early morning walk up Ben Nevis. The day before I had a superb day with the grandchildren, we went looking for Dolphins at Channory point but unfortunately we missed them. The weather was magic later in the day and we had a superb afternoon in Inverness, with a Scottish BBQ in the sun. Later on I had a great drive over to Onich near Fort William. I went via the South side of Loch Ness a special drive with incredible view, this quite road is getting some work done on it but what views, what a drive. I was soon at Spean Bridge and the Commando Memorial what a situation, it is always a place to stop and tonight was special. This is a place of wild beauty and the mountains were looking incredible. They were calling and what a night to be on the hill. This is a place that people drive pass and I regularly stop we must never forget what these incredible people did for us. The view of the Grey Corries and the Anoch’s and the Ben were so clear, the snow, sunlight and clarity all the cliffs were standing out.  I was soon in Onich and the midges were out. I had a quick drink and then a few hours’ sleep I was on the hill at 0430 – so it was up at 0300.It would have been a night to be out and doing some of these great mountains at night, May is a great month for the mountains. 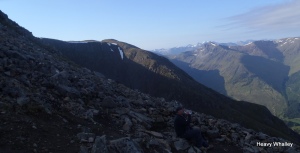 I had been asked to take a group of American serviceman up Ben Nevis; they had driven up from the deep South overnight and wanted to be on Ben Nevis for a 0430 start!  The trouble with an Alpine style start  for me is that you hardly start to doze off and you wake up frightened to sleep in.   Old nightmares of the Alps reminded me of other early starts, in torchlight and sunrises that one will never forget.  It was a lovely morning, the light was already bright and the short 20 minutes’ drive to Glen Nevis along the Loch was magnificent. I arrived to a deserted car park and after paying the £3 parking fee at 0430 it was good to know that the toilets were shut!  My hill companions arrived and we all had a chat and off we went. The weather was magic and the light ever-changing and no midges.  Now the Ben Nevis path is too many  some “the mountaineering snobs” is not the way to go up the Ben but today with no one else about it was a great walk. It is hard work and my American friends who were still feeling the effects of the night were in for a special day. There is a lot of work going on at the path the iron bridge the path makers are busy on the Ben path on the way off. This path gets hammered every day with over 200,000 climbing the Ben every year.  How many help with its up keep! 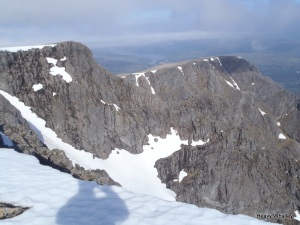 Tower Ridge Ben Nevis – a view I never tire of!

It was a fun walk, the air was chilled and the lambs were about, we passed two huge ravens on the path watching with interest. The birds were singing and then after leaving the river the pull up the mountain starts in earnest. We had great view, Glen Nevis is always outstanding with the greenery and the still snow-capped Mamores and Sgurr A’ Mhain looking great.    The progress until the half way Lochan is unrelenting but we had a few stops. The path had little litter and the flowers were lovely by the path the sundew with flower especially pretty. The light here was stunning and we stopped for a break at the Red – burn, the snow clinging to the gully still. It was then onwards up the Zig Zags where we met our first other walker. He was a young lad from Wales working in the Youth Hostel in the Glen and had spent the night on the summit; it was very cold he said as he bounded off back for work! One of our party went back here not feeling good after an upset stomach and we soon reached the snow at the top of the Zig Zags. 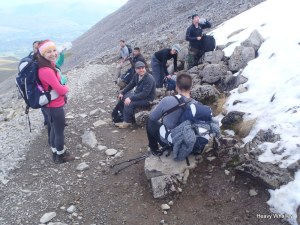 A break on the Zig Zags. A happy bunch.

On the way up young lass about 8 and her Dad powered past, she was going so well and Dad was very proud as she seemed a natural.  We kept meeting and it was a joy to see such a young girl enjoying the mountains and reminded me of past days with Yvette and Stephen and hopefully with Lexi and Ellie! My group were loving it, the hill was not easy but they were and taking so many photos, they were getting Scotland at its best, no wind and not too hot for walking and plenty of photo stops.  The great view of the mountains open up all the time and the panoramas today were magnificent.  The snow in places was very hard and frozen but easy to walk on and much near the summit was tinged with red from the sandstorms from the deserts?  The big Cairns were soon in view and the great Cornices like some overhanging ice – cream made the views outstanding. We met another group on the summit and had a great break, even views of Tower Ridge looking incredible and the snow in the Corrie. The massive Cornices as much snow as I have ever seen for a while.  I never tire of this view so many great days and hopefully so many more to come, this was day to be in the Corrie, the great ridges looked so inviting but so was the magic views today. 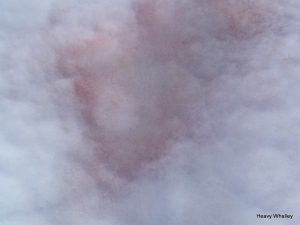 Red tinged snows on the Ben!

We were soon off after lunch. I picked up some rubbish 6 plastic bottles and lots of rotting banana peel from the summit area. From  now we met a constant crocodile of people, all ages, shapes and sizes and so many kids, I said good morning about 600 times and it was great to see so many out. How can we not be happy that for many are experiencing their first hill –walk on such a mountain that keeps its secrets till the top?  The weather was now warm and all the clothes used on the summit were shed and the snow going downhill was good fun, even with a dodgy knee and hernia!  It is hard going on old knees and even the youngsters in the party felt it too. It was hot on the descent and the son was up, we were soon getting down still stopping and drinking as re – hydration is important on such a day. I had a sun hat on and lots of fluid yet still had a slight headache, the sun can cause problems so please be aware. Well worth remembering? 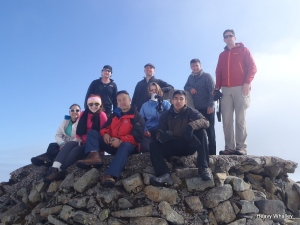 The work party on the iron bridge were now hard at work and a wee queue formed here, what a magic job they do and I put a wee donation in the cairn at the end of the track for path upkeep, do you ever do this?   It was then back to the car park where a bacon roll and a brew met us what an end to the day. The group was now off to see the commando Memorial and a trip on Loch Ness then a drive to Kintail, they were all tired but great company and they all loved the Big Ben and had a day never to forget. 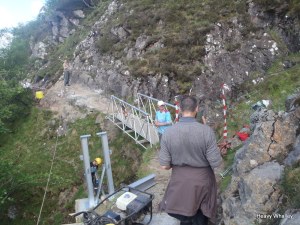 Bridge Repairs on the Ben path – do you contribute to the upkeep.

I had a slow drive back, Laggan was incredible and the car parks were full, the sun was out and I stopped and rehydrated all the way home. The body was a bit sore but despite the early start the Ben even by the Mountain Path early morning is a place of great beauty. My local Cairngorms were stunning and the Dava Moor a blaze of colour and I was soon home, a bath and an easy night. The knees are sore but worth the effort even the Alpine Start! 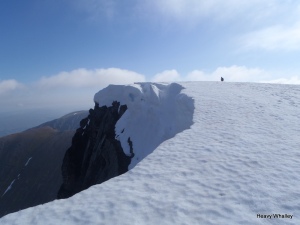 Big snow in May

Thanks for the company and a great day out – well worth the effort.