July 1944 – With the increasing number of flying accidents in the mountains, Mountain Rescue was playing a more important part in RAF Kinloss Station activities based in Morayshire Scotland. A voluntary team had been in existence for some time but in July 1944 a Mountain Rescue Instructor Sgt Hanns J Pick was posted in to organise and train a proper Mountain Rescue Team. 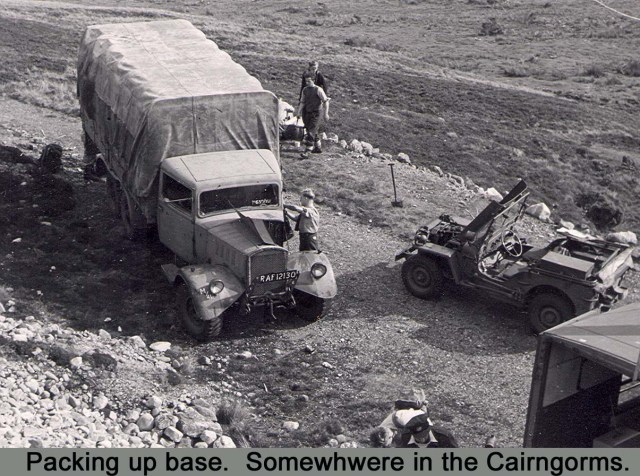 The team was equipped with a jeep and a ambulance which had a radio receiver fitted in October 1944. The first major task of the newly formed RAF Kinloss MRT was the collection pf the bodies of Lancaster PD 259 which crashed with no survivors South of Tomatin on 31 August 1944. A lot of this aircraft are still to be seen at the site of the crash. I visited this site a few times in my days with RAF Mountain Rescue as navigation training for the new member’s.   It is as always a lonely poignant place a lot of the wreckage has been removed see article below.

Wreckage a lot gone since this photo .

Extract of operations record for the morning of 1st September, 1944.

Time 0010  – Crash party under Station Medical Officer and Flight Sergeant Engineer left by road for KINGUSSIE in which area a ROC (Royal Observer Corps) post had reported a crashed Lancaster Bomber. This party was out for approximately nineteen hours in very wild hilly country.

The bomber had apparently exploded in mid-air at an estimated altitude of 10,000 feet, for the debris was spread out over some two square miles of country.

Six bodies of the crew, five Australian and one British were discovered, but due to the nature of the country it was not possible to bring these remains in at once. A seventh member of the crew was still missing when the party returned to LONGMAN.

The aircraft was traced as Lancaster aircraft J.O.G. belonging to R.A.F. Station, WADDINGTON. The “Mountaineering Section” KINLOSS relieved the LONGMAN crash party in order to bring in the bodies of the air crew the following day.

Those who died in this accident were:

All except Warrant Officer Middleton were Australians. W/O Middleton was British.

During 2008 – 2010, almost all of the wreckage was recovered from the crash site. The following links show photos and video of the recovery operations and photos from RAF Waddington Heritage Centre.

Much of the wreckage is now stored at this Centre; although a propeller blade from the aircraft has been placed at Balavil Estate cemetery.

Mountain Rescue Specialist. Environmentalist. Spent 37 years with RAF Mountain Rescue and 3 years with a civilian Team . Still an active Mountaineer and loves the wild places.
View all posts by heavywhalley.MBE →
This entry was posted in Aircraft incidents, Mountain rescue. Bookmark the permalink.