Posted on November 27, 2012 by heavywhalley.MBE

Hamish McInnes was the incredible inventor of his famous ice axe and hammer which changed the face of ice – climbing. It is amazing how revolutionary they were for the time.  He designed the first all-metal AXE and is credited with introducing the short ice axe  and hammer with inclined picks for Scottish winter work in the early 1960s. The “Terror” as it was known by all the climbers was a great tool at the time.

“But it was not manufactured by him until the early 1960’s, using aluminium alloy shafts. The decision to make these all metal ice axes available to the public was taken after Hamish found two wooden axes broken after a fall on Ben Nevis in Zero Gully, where a party of three mountaineers were killed. All metal ice axes are now made internationally and have had a major impact on climbing throughout the world. His later invention, the ‘Terrordactyll’ has had a global impact on the course of difficult winter climbing. These inventions should have made him a rich man, but big firms copied and exploited his design, making it more cheaply than he could. Hamish says he is not upset by that:

‘I was primarily interested in safety for climbers, not profit.’ What a man! What a climber! Some of Hamish’s routes in winter. 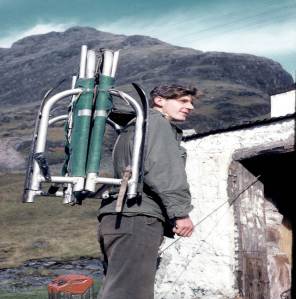 He also designed some incredible stretchers which were again a massive breakthrough for mountain Rescue. Hamish MacInnes designed his first folding stretcher in the early 1960’s. Made from aluminium alloy, some of those early stretchers are still in use. The design has been continuously improved over the years and they have been used on five Everest expeditions. The MK6 splits in two and is carried to an accident scene on special pack frames and is extremely rugged. The latest MK7 model, made from space age materials, has amazing strength and resistance to abrasion or low temperatures. This one piece stretcher meets the requirements for disasters, military operations, dedicated helicopter work and mountain rescue. I am lucky having worked with Hamish on many occasions and he helped me no end along with several others when I became a Mountain Rescue Team Leader.  What a talented man, with his books, films and his inventions. He always travelled light on rescues and never seemed to feel the cold, they make them hardy in Greenock and Glencoe. We mountaineers owe him so much.