Henley Visit – A few thoughts on the book Trauma and the closure of RAF Leuchars. 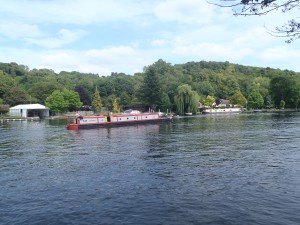 River Barge a change from the mountains.

Still down South enjoying time with my lovely granddaughter and getting out in the showers for a walk when the sun is out. It is great to get away and enjoy this lovely area. I have managedto make time to read the book Trauma by Professor Gordon Turnbull. This book is about Post traumatic Stress based on the Professors early days working with the Mountain Rescue Teams after Lockerbie. It is a difficult read for me as it brings back lots of bad memories of a very difficult period for myself and many friends who were involved.   Some of the civilian teams were badly effected and did not have the basic support that the RAF Teams had. I am trying  to get hold of professor Gordon Turnbull to discuss the input of the RAF teams and then I will comment on the book.  I was at Leuchars when Lockerbie happened in December 1988, I was the team leader and we had a great team and did our best during a terrible period in our lives. Many lessons were learned and one thing this book does is acknowledge that we asked for help after the tragedy and this helped the military accept that PTSD is real. This was a period when the establishment did not recognise it. Mountain Rescue was at the forefront of the treatment and many ideas came from how it was dealt with after Lockerbie. The news of Leuchars closing is now out yet very little down here in the deep South about it. It will have a huge effect on the area and my thoughts are with those who will lose their jobs.RAF Leuchars team will be a great loss to the community. The mountain rescue team was a great addition to Mountain Rescue in Scotland and has been involved in so many lives saved. It is the end of an era.

Eric Hughes Eulogy is on the RAF Mountain Rescue Association Website I do not have the link handy but google it RAFMRA and look at articles. I will put it on my website when I return.