Lawyers Munroes – Busy hills for once for one man and his dog Penny ! Wind Farms

BACK IN GLEN LYON

After yesterday’s hills I got parked up at a nice spot about half a mile outside Kinloch Rannoch beside the river , when I stopped the river just had a normal flow but later on it had risen dramatically ?? I then realised it must be the power station on the loch in operation taking the water from Loch Ericht and raising it’s level.
Up at 7, breakfast and bag packed and a drive round into Glen Lyon again up as far as Camusvrachan , parked just before the bridge and was on my way by 8.40 following a good track on the S side of the river as far as Inverinain then steeply up through the forest and into the open hillside . There was another mini hydro scheme off of the Inverinain Burn which was finished and blended in very well. Continued on a rough track till I hit the fence line and followed it before branching off onto Meall Greigh , clear views all round today which got better as the day went on, due W for a while then up SW towards the second summit of the day , 50m below the summit i spotted a pair of Dotterel , not the most common bird around but didn’t seem bothered to much by me.
Down steeply and back up very steeply onto An Stuc , up till this point I had the hills to myself again but being bank holiday Monday Ben Lawers was covered with people as I looked over onto it , nothing else for it i would have to be another one for a short while gracing its summit . Descending towards Beinn Ghlas there was still numerous hikers heading up to join the masses. Down to the bealach and again steeply onto Meall Corranaich . Now it was just a long gradual descend N towards the final hill of the day and here i got a easy one due to the biggest snow slope of the day , up easy grass slopes to the summit . All downhill from now and i headed for the track on the W side down to Balmenoch and joined up with my outward route and back to the van.
Today’s totals
18 .05 mls -2196m ascent -6 hrs 42 mins
68 Munros to date.

The first time I climbed these Munros was with Tom MacDonald and Allan Bolton in 1973 We had no transport and Tom Dad dropped us of, it was very icy and I  remember the descent of An Stuc being interesting! This area has a fantastic amount of wild flowers and Tom became a well known botanist and knows the hills and the wild flowers well a great skill to have. I remember being disappointed at the huge car park below Lawyers a honey pot area but it allows many to see these big hills  and the walk down to the road to hitch home to Aberfeldy no mobile phones in these days.These are grand hills but can be busy and if going well can break a few hearts especially if you add the additional Meall Nan Tarmachan great training for the bigger hills days up North.  A few of the RAF Leuchars MRT will remember these big days well as do my knees.  A few wild call outs and getting dropped of by the Wesssex Helicopter below the steep West Face in full winter with my Dog. I had a great overview of over 100 searchers  looking for a missing walker and on your own in full winter on steep ground makes you very careful.  It was late in the day when we found a few clues that day and an early morning search located the casualty. We also took the Milton Mountaineers ( blind walkers) up Lawyers a long hard rewarding day for all and something that makes you feel very humble and a big learning point for many of us. These were really hard days but incredible to see the young troops in action guiding and being depended on by the walkers a huge trust involved by everyone.   These hills have many ruins in the Glens where people lived in the past in the summer looking after the cattle and scraping a living, I always found these places very sad. Hard days  indeed.

It is great to see Graeme and Penny going so well the day before they were in the wilds of Rannoch with its huge expanse of space. This is another wild area that may be lost for ever any views ? 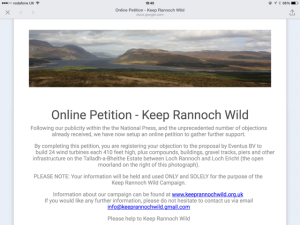 Following our publicity within the the National Press, and the unprecedented number of objections already received, we have now setup an online petition to gather further support.By completing this petition, you are registering your objection to the proposal by Eventus BV to build 24 wind turbines each 410 feet high, plus compounds, buildings, gravel tracks, piers and other infrastructure on the Talladh-a-Bheithe Estate between Loch Rannoch and Loch Ericht (the open moorland on the right of this photograph).PLEASE NOTE: Your information will be held and used ONLY and SOLELY for the purpose of the Keep Rannoch Wild Campaign.Information about our campaign can be found at www.keeprannochwild.org.uk
If you would like any further information, please do not hesitate to contact us via email info@keeprannochwild.gmail.com

Your support is very much appreciated.
Many thanks

Mountain Rescue Specialist. Environmentalist. Spent 37 years with RAF Mountain Rescue and 3 years with a civilian Team . Still an active Mountaineer when body slows, loves the wild places.
View all posts by heavywhalley.MBE →
This entry was posted in Hill running and huge days!, Munros. Bookmark the permalink.